Aquaman, Volume 4: Death of a King 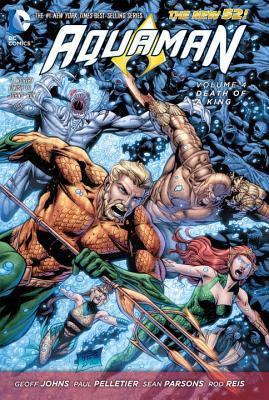 Geoff Johns wraps up his heretofore stellar run on AQUAMAN, and, as usual, overstays his welcome by just a bit.

AQUAMAN, VOLUME 4: DEATH OF A KING, which collects AQUAMAN #'s 17-19, and 21-25, finds Aquaman reluctantly sitting on the throne of Atlantis, after ending the Atlantean's war with the surface world, and tossing his half-brother, The Ocean Master, into the clink at Belle Reve Prison. Johns already had enough balls in the air, what with the Atlanteans not trusting Aquaman, the treasonous Vulko awaiting trial, the monsters of The Trench, and the impending trial of The Ocean Master, but, as usual, he can't just wrap things up and go off into the sunset....As he did with GREEN LANTERN, he has to have one last giant free-for-all battle involving more "Secrets come to light that CHANGE EVERYTHING!!!!!"

In this case, it's "The Dead King", the first King of Atlantis...he's still alive (Or, as his name implies, still dead...), and he wants his throne back!!! This leads to more angst, fights, and secrets being revealed, blah blah blah....Not a bad book, but not up to the standards of the previous three volumes (and the JUSTICE LEAGUE crossover.).

Artist Ivan Reis is gone, replaced by the able Paul Pelletier, whose work is slightly more comic-booky, but wonderful nonetheless.

This volume is, on the surface, crossover free, until a bit at the end that made me say "WTF...? Wasn't that guy just in prison...? Oh, wait...that girl just said something that made me think he must have escaped during the FOREVER EVIL crossover, which won't be collected until the Fall....." PUT IN A RECAP PAGE, OR SOMETHING, DC....YOUR BOOKS ARE HARD TO FOLLOW!!!!!

Posted by The Crabby Reviewer at 1:05 PM