I first encountered William Friedkin's brilliant 1977 film SORCERER on some obscure cable channel in the late '90's, and I was blown away by it. I couldn't believe that such an amazing film had slipped by me for so long. But I wasn't alone....SORCERER is, in a way, a modern-day "lost film"....Friedkin's story of a disparate group of exiles transporting unstable cases of nitroglycerine through 218 miles of hellish South American jungle had the misfortune of opening against STAR WARS, as well as having a confusing title and no real bankable stars. It quickly vanished from theaters, and has essentially been lost to filmgoers ever since, aside from the occasional lousy print showing up on cable, and an abominable DVD release that featured an ugly pan-and-scan transfer. SORCERER's day has finally come, though, in the form of a beautifully restored new Blu-Ray release.

I always said that I'd be satisfied, and grateful, for ANY kind of Blu-Ray of this film. 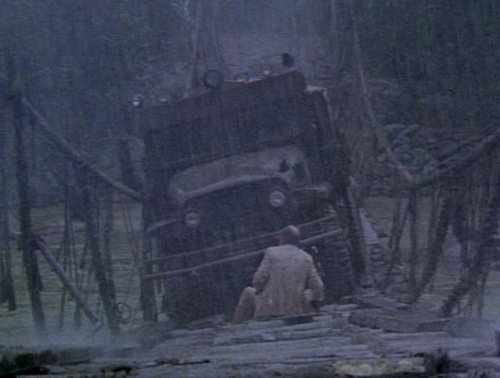 The film opens with four lengthy prologues, which show how our four protagonists end up hiding out in South America. (One is a hitman, one a terrorist, one a disgraced investment banker, one an Irish-American mobster running away from a botched heist that ended with a contract on his head.) A catastrophic oil-well fire forces the oil company to offer a small fortune to four men who are dumb, greedy, or just plain desperate enough to transport six cases of ancient, unstable nitroglycerine across 218 miles of green hell in order to put out the burning well.

I won't get into further detail...I'll just say that SORCERER was the most nerve-wrackingly suspenseful film that I had ever seen, and multiple viewings have done nothing to diminish it's impact. I watched it last night, and my heart was thumping just as fast as it did the first time I saw this film almost two decades ago.

I ordered this film, sight-unseen, from Amazon, months ago, and it arrived bright and early on my doorstep the day it was released, this past Tuesday. The disc is enclosed in a neat little hardcover book package, with a small, freestanding note of introduction from Director William Friedkin inserted into the book. The text of the book itself seems to be excerpts from Friedkin's autobiography, THE FRIEDKIN CONNECTION. The excerpts provide some interesting facts about the making of the film, as well as insight into the director's thought process. It's also filled with dozens of beautiful, full-color pictures of the cast and the sets, which were not included in Friedkin's original book.

The film itself has never looked better...the lush green of the jungle, the deep, ominous blues that saturate the downpours that plague the truck drivers...The dirt and grime that cake the film's stars are so clear that you start to feel dirty just from watching. 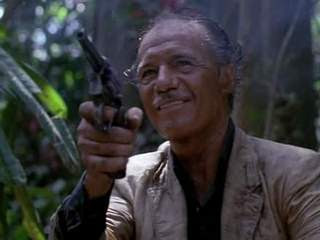 That said, I was dismayed to discover a complete lack of extras of any kind. This is probably our last shot at any extras for such an obscure film, unless Criterion does a special edition sometime down the road. It's a shame, because the production of this film was, by all accounts, a nightmare, and I would kill to see a decent making-of, retrospective, or something, ANYTHING...We got nothing, and that sucks, but I suppose that we're lucky to be able to see the film at all, considering the decades of studio antipathy expressed towards it.

On a personal note, I consider SORCERER to be my third-favorite film, right behind THE EXORCIST and JAWS. I was really looking forward to sharing this masterpiece with my wife. She fell asleep after 30 minutes, proclaiming it "boring", and "pointless", and this morning she expanded on that by calling it "One of your weird films that no one but you likes." My wife thinks FULL HOUSE is the pinnacle of comedy, so...I love her, but fuck her tastes in entertainment. I give up on saving her, but I can potentially save YOU, and steer you towards a film that will knock you on you fucking ass, if you give it a chance.

You won't be sorry.


Posted by The Crabby Reviewer at 2:59 PM