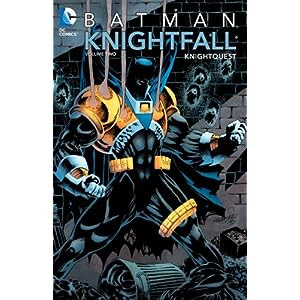 In which the dark streets of Gotham City are patrolled by a homicidal, suicidal, genocidal maniac....

(Maybe not genocidal, but I just couldn't resist the Sabu reference.)

(SPOILERS FOR A TWENTY YEAR-OLD COMIC!!! DON'T SAY I DIDN'T WARN YOU!)

Bruce Wayne is down and out, Azrael has taken over the mantle of the bat, and we're in the long stretch of waiting for Bruce to come back and kick this nut-job's asshole in. The KNIGHTQUEST story was fairly innovative at the time it was published....It was almost unprecedented for a hero to be sidelined and taken out of his own book at the time. (DC was doing the same thing almost simultaneously in the SUPERMAN books, with the DEATH OF SUPERMAN/FUNERAL FOR A FRIEND/REIGN OF THE SUPERMEN arcs.) It was exciting stuff, finding out that the new Batman was a kook, watching him isolate himself from Robin and Commissioner Gordon, and seeing him upgrade his armor every few issues, until he was virtually unrecognizable. Reading about a totally unlikeable lunatic for a few minutes every week or two was one thing...reading almost 700 pages of him at once is a whole other beast. Jean-Paul Valley was not meant to be liked or admired...he was meant to make you yearn to have Bruce Wayne back. As such, it's hard to read such a concentrated dose of his personality, or lack of one: He's really a woefully underdeveloped cypher...literally a placeholder for the real Batman.

And therein lies one of the biggest problems with this book: The sheer amount of Azrael we get, due to the loss of virtually all of the KNIGHTFALL: THE SEARCH arc, which followed the wheelchair-bound Bruce Wayne across Europe as he searched for Tim Drake's kidnapped father. These chapters, while not necessarily good, did provide a much-needed respite from the sturm-und-drang of the main KNIGHTQUEST: THE CRUSADE storyline. Excluding these chapters gives us nothing but all Azrael, all the time, and it also provides a potentially head-scratching moment when Bruce Wayne, Tim's father in tow, reappears hale and healthy, walking, no less, just in time to catch a beating from the heartless new Batman. I think there are a grand total of eight issues missing, and considering how important those issues are to Bruce Wayne's story, that's a pretty significant story loss.

I do have to make special mention of how awful Doug Moench's contributions to this collection are..he writes the BATMAN issues, and wow...some of this stuff is beyond dreadful. I point you to the issues that feature a trio of toughs that are based on The Three Stooges. This is a (Bad...) one-panel gag, at best...Moench stretches it out over a few issues. Woof. DETECTIVE COMICS scribe Chuck Dixon started it, though, by having The Joker assisted in his efforts to film the murder of Batman by doppelgangers of Gene Siskel and Roger Ebert earlier in the volume. The '90's were a weird time....

BATMAN: KNIGHTFALL, VOLUME TWO- KNIGHTQUEST collects DETECTIVE COMICS #'s 667-675 (Pretty good), BATMAN; SHADOW OF THE BAT #'S 19-20 and 24-28 (Uniformly awful and ugly), BATMAN #'s 501-508 (Bland and overwritten), CATWOMAN #'s 6-7 (Awful, confusing, and pointless), and ROBIN #7 (Really good). The exclusion of ROBIN #1 makes for a confusing cliffhanger at the beginning of the collection.....That and the missing Bruce Wayne arc makes me say, yet again, "WAY TO GO, DC COLLECTED EDITION TEAM!!!!" Sloppy stuff...a quick glance virtually anywhere online could have given them a better idea of what issues to collect, and in what order. I hope they get their shit together sometime soon, but I'm not holding my breath.


Posted by The Crabby Reviewer at 1:55 PM