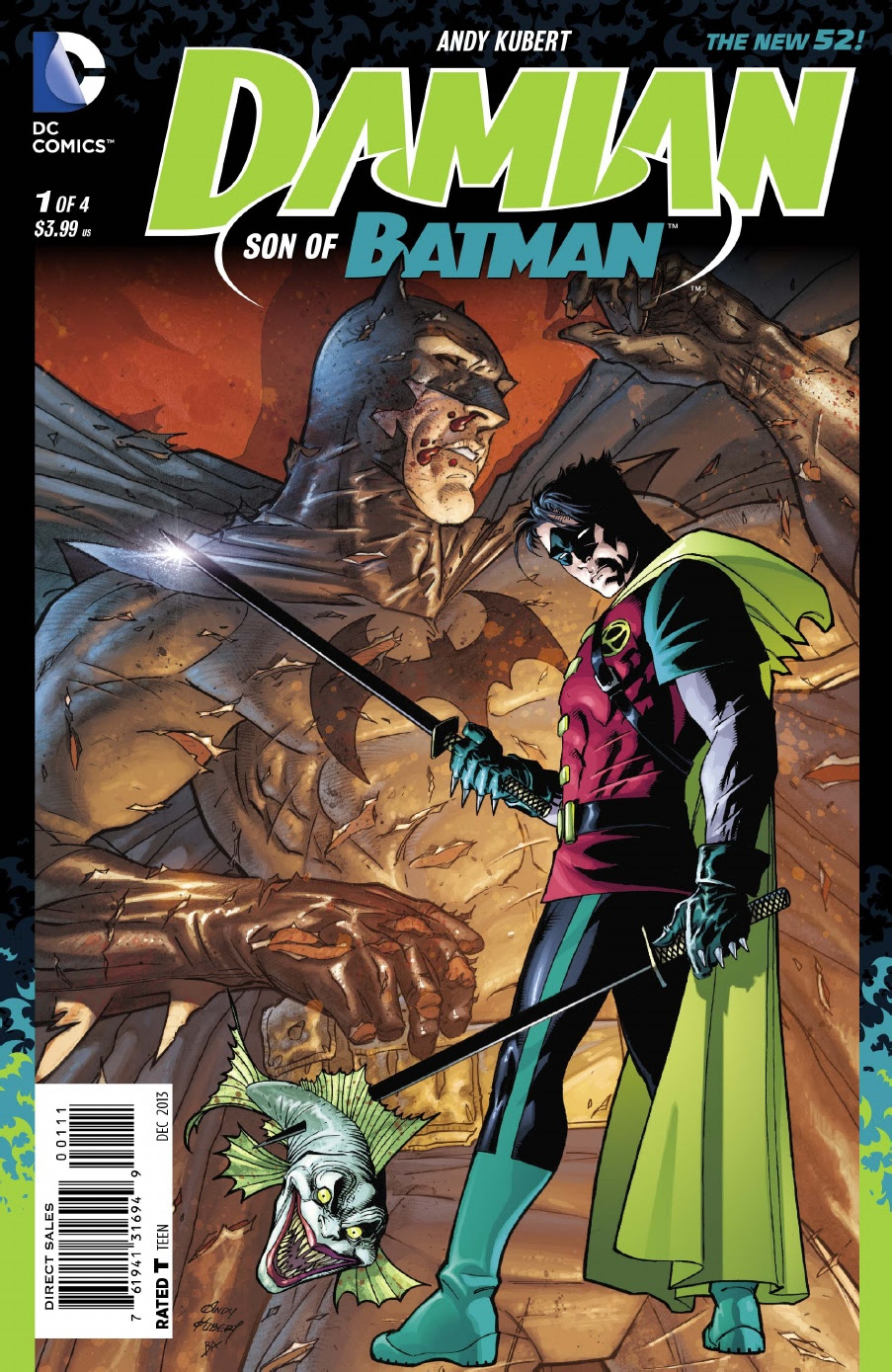 The good news: Damian Wayne is back!!
The bad news: He's being written by an artist.

Back in the olden times, the young crabby reviewer was captivated by the advent of the Writer/Artist. Under the auspices of Jim Shooter, Marvel Comics cultivated a crop of talented artists, and gave them the opportunity to write and illustrate their own books. I don't know if John Byrne, Frank Miller, and Walt Simonson were just naturally talented, if they were given editorial guidance that helped mold them, or if they just absorbed good writing from all of the gifted writers that they had previously worked with......but whatever it was, their runs on FANTASTIC FOUR, DAREDEVIL, and THE MIGHTY THOR were epic, legendary, and live on until today.

Unfortunately, for every Mike Mignola that they inspired to write, there's a Todd McFarlane, a Rob Liefeld, a Whilce Portacio...people who have taken it upon themselves to write as well as draw, because....How hard can it be, right? Considering the glut of truly shitty comics that have come from Writer/Artists, anyone attempting it these days should take a long, hard look at their skills and ask themselves "Can I do this...?

Andy Kubert, unfortunately, cannot do this.

I can't place all of the blame at Kubert's feet, because someone at DC should have actually EDITED this book, and maybe...I dunno...tried to work with Kubert to shape it into something readable? Because it's a mess, and that's a shame, because if they had tried to improve the script, or hired an actual writer to dialogue it and help with the plot, it could have been a winner.

Damian Wayne is not an easy character to write, and very few authors have managed to capture his voice properly. As created by Grant Morrison, Damian is a horrible, murderous, sarcastic brat, albeit one with a darkly humorous outlook on life, and a strong commitment to his father's mission, and his extended family. Damian quickly grew to become my favorite comic-book character, and it was a sad day when Grant Morrison killed him off at the conclusion of BATMAN INCORPORATED. (I'm sure he'll be back, at some point, and that gave me comfort until I read this book and realized that he may come back and be written by someone who just doesn't get him. Now I hope he stays dead.)

The problems with this book's narrative structure became apparent early on, when Batman & Robin investigate a mass murder at the Gotham docks. Batman is killed, and it wasn't until much later, when Damian is attacked by an enraged Bruce Wayne, that I realized that the Batman that dies was Dick Grayson. This is never made clear to the reader in that opening sequence, and that's incredibly sloppy. (It's also never made clear why Bruce Wayne is so old and messed up, if only a few years have gone by, why Alfred becomes a talking cat, who the fake Joker is, why Jim Gordon is now a Priest with Batman-level vanishing abilities...or is he supposed to be a ghost, maybe? I had no clue.)

DAMIAN, SON OF BATMAN collects the four-issue mini-series of the same name, as well as Grant Morrison's BATMAN #666, which is much better, but will probably be hard for new readers to follow outside of the storyline it was originally a part of.

Publishers need to realize that, in this economy, and with the comic industry in the sad shape it's in, that every time you publish an inferior book, you risk alienating readers. Enough bad books can make a longtime reader just give up and walk away. (I walked away from Marvel for a good portion of the '90's because of the drek they were turning out, and I'm about one universe reboot away from giving up on Marvel again. DON'T REBOOT, MARVEL!!!) Quality product takes time, but it's worth it....Just my two cents, DC.


Posted by The Crabby Reviewer at 2:52 PM