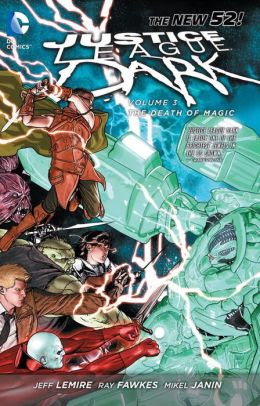 When we last saw the horribly-named JUSTICE LEAGUE DARK, Tim Hunter and Zatanna were whisked away to God only knows where by The Books of Magic, which were actually other-dimensional machines....where did they go? And was it worth following them there...?

Well, they went to yet another alternate comic-book reality (See HOUSE OF M, AGE OF ULTRON, ROTWORLD, FUTURE'S END, blah blah blah...), and no, it really wasn't worth the $16.99 cover price to follow them there.

Make no mistake, this is not a bad comic, but it also wasn't an especially engaging one. I place the blame for that squarely at the feet of writer Jeff Lemire (Joined in this volume by Ray Fawkes)....the art, by Mikel Janin, is spellbinding. The back cover has a quote from Comic Book Resources that proclaims "Mikel Janin is one of the best artists working for DC Comics.", and it's hard to disagree with that assessment. The fault in JUSTICE LEAGUE DARK, VOLUME 3: THE DEATH OF MAGIC lies in the stultifyingly dull plot.

First off, the "New 52" version of John Constantine is just a rotten, useless twat. The old John was a dangerous asshole, but he had his good points. This John feels more like someone that The JLD should be trying to lock up, not following. The conceit of The JLD living in the sentient House of Mystery is interesting, but completely stolen from Gail Simone's SECRET SIX. I enjoyed most of the rest of the cast, especially Frankenstein, which makes me glad that I have all of his "New 52" trades sitting in the stacks waiting to be read. Tim Hunter, as always, is an uninteresting void of personality. The first chunk of this collection revolves around Tim and The Books of Magic, which may be why I didn't care for it. Plus, it was one of those "Alternate reality" stories, and if I never saw another one of those, I'd be perfectly happy. (Also, not one but TWO characters just disappear from the story with no explanation whatsoever- Amethyst and Doctor Mist. However, I was so bored that I actually finished the book without noticing that they were gone.)

The second story in this collection was more to my liking, as it featured Doctor Destiny, and kept up the creepiness that Neil Gaiman infused him with way back in the early issues of SANDMAN. There's a nice bit of work here regarding Destiny's connection to one of the team members, and an appearance by The Flash that was there to...bump sales, maybe? Because he really didn't serve much purpose. I also kind of died inside when it was revealed that Constantine and Swamp Thing HAVE NEVER MET!!!! WTF??? (Even though Volume 2 alluded to the events in Alan Moore's "American Gothic" SWAMP THING arc.) That really sent me for a loop, and made me feel old and unwanted in this new DC Universe.

From here, JLD (In the next collection...) will be headed into the TRINITY WAR crossover. As George Takei might say, "Oh MYYYYYY." Holy shit, do they beat your fucking head in with all of these crossovers, or what? (I weep to say that I bought the TRINITY WAR hardcover, so a review will be forthcoming....)

Unless the JLD portions of TRINITY WAR are just amazing, I think I'm done with this book. Aside from Mikel Janin's art, there's nothing here that appeals to me.

JUSTICE LEAGUE DARK, VOLUME 3: THE DEATH OF MAGIC collects JUSTICE LEAGUE DARK #'s 14-21, complete with all covers, and has a small cover sketch gallery at the end of the book. Blandness aside, 8 issues for $16.99 is a steal, considering some of the thin-ass collections that Marvel is putting out these days.

Posted by The Crabby Reviewer at 3:41 PM