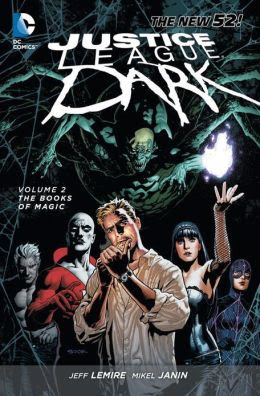 For a variety of reasons that defy a condensed version, I am forced to read JUSTICE LEAGUE DARK, VOLUME 2: THE BOOKS OF MAGIC without the benefit of reading Volume 1 first. Is there a chance in hell that this will make any kind of sense...?

Well, against all odds, it actually did.

And there were some BIG odds stacked against it. Not the least of which is DC's fucking obsession with crossovers, and the terrible way that they handle them in their collected editions. JUSTICE LEAGUE DARK, VOLUME 2: THE BOOKS OF MAGIC opens cold with JLD, as it will be referred to from here on out, issues 7-8, which are part of a, say it with me......CROSSOVER....with I, VAMPIRE, another book that I own but have not yet read. So marks against it for that. There is precious little backstory given, we're just thrown into the fray mid-story, as the JLD attempts to save a Vampire-ridden Gotham City from some guy named Cain, who appears to be the head Vampire. The second part ends on a cliffhanger, and then.....go fuck yourself! Buy I, VAMPIRE if you want to find out what happens next, assholes! (Just an idea, but if DC insists on collecting these crossovers in such a haphazard way, maybe they could, I don't know...TELL YOU where to go to get the rest of the story? It seems like that would at least make good business sense, and give readers a way to find out where to go next instead of just wondering "What the fuck just happened...?" And maybe put in a text recap before and after the crossover chapters, to get readers who don't want to buy a million books up to speed and give them some kind of closure.)

Anyway, given the absolutely shitty circumstances those two issues presented, writer Peter Milligan does a great job of making it entertaining, if not exactly reader-friendly. The art for these opening chapters is provided by Admira Wijaya and Daniel Sampere, and they both acquit themselves marvelously. (In fact, the entire book is beautifully illustrated.)

Milligan, and the cliffhanger, are both things of the past by the time we reach the third chapter, which starts new writer Jeff Lemire's run. Lemire does a good job with his epic, which fills out the remainder of the book, but his work, while readable, didn't really click with me. I liked this book, but I didn't love it. I already own Volume 3, so I'll have to see how I feel about that one, but, based on this volume, I'd lean towards dropping this book from my already bloated buy list.

One huge problem that I have with this book, and "The New 52" in general, is how new-reader-unfriendly it is. Aside from the endless crossovers that have marred "The New 52" almost from the outset, most of the books give you no backstory or recaps whatsoever, they just assume that you'll know who everybody is and what they're doing and why, which seems to contradict DC's reasoning for the reboot: New readers. They claim to want new readers, yet they relentlessly trade on the stories of the past, assuming you'll be familiar with them, thus enabling them to speed by important events without having to actually delve into them. For a rebooted universe, an amazing number of important story beats have already happened, mostly offstage. In this book alone, Neil Gaiman's BOOKS OF MAGIC story and Alan Moore's SWAMP THING epic AMERICAN GOTHIC get referenced, with no attempt whatsoever to get new readers up to speed. (The SWAMP THING reference is particularly egregious, since that's a story that has been hard to get until recently, and the books that collect it are quickly falling out of print, thanks to their indifferent publisher.) For such a wordy writer (And honestly, Lemire packs these pages with more blocks of dialogue that Chris Claremont did in his wordiest X-MEN comic!), Jeff Lemire could have used some of that endless dialogue to fill in some backstory. Another example of the "You should already know all of this!" school of "The New 52" are the out-of-nowhere appearances of Frankenstein and Amethyst, both of whom I knew almost nothing about, and know just as little about now. They appear, serve their purpose, and left me scratching my head. That said, Lemire does build up an interesting head of steam as he rushes the heroes and villains towards a climax worthy of a summer blockbuster, and he ends on a note that virtually guarantees that readers will want to see what happens next.

One other odd thing that I need to mention: For a book that is populated with Vertigo outcasts, JUSTICE LEAGUE DARK is almost completely free from the foul language and grotesque beheadings, dismemberments, and eviscerations that fill the pages of DC's more "mainstream" books, such as BATMAN, WONDER WOMAN, and AQUAMAN. Odd that the book with "Dark" in the title would probably be the book that I would be most comfortable letting my kids read.

JUSTICE LEAGUE DARK, VOLUME 2: THE BOOKS OF MAGIC collects JUSTICE LEAGUE DARK #'s7-13, 0, and ANNUAL #1, complete with all covers, and includes a small sketch gallery in the back, with commentary by artist Mikel Janin. This is a HUGE collection, and delivers a lot of value for your money.