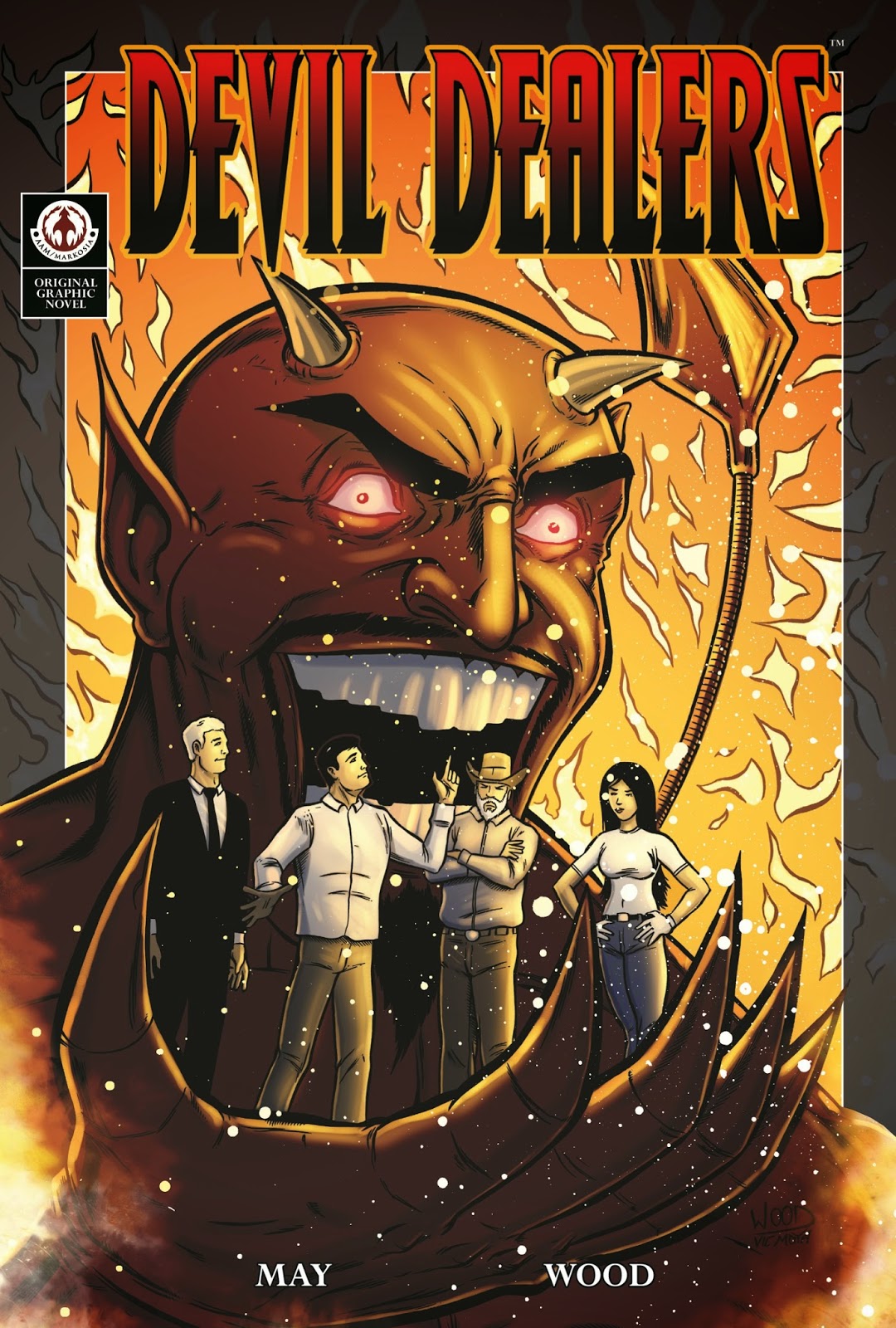 I'm a sucker for any kind of story involving The Devil. So a graphic novel featuring El Diablo would seem to be a no-brainer. Bring on the DEVIL DEALERS!!!!

Created by writer Ross May and artist Brett Wood, DEVIL DEALERS is a genre-bending slice of Luciferian fun that finds a disparate group of people chasing down Old Scratch. The book opens with high-stakes gambler Greg Gagne being invited to a card game where he is ultimately forced to use his own soul as a stake. (This opening scene reminded me a lot of Bill Willingham's PROPOSITION PLAYER, which also finds a gambler playing for a soul, but the two books take radically different paths after the initial premise.) In a cute bit of going against reader expectations, Gagne wins his hand, keeping his soul and winning his bargain with The Devil for "Half of the world's money". There's no time for Gagne to gloat, as the game is interrupted by a group who is hell-bent on grabbing The Devil. (Not capturing, just grabbing.....)

Gagne soon finds himself traveling along with this odd assortment of characters and bankrolling their quest to grab The Devil. (One of the group's members, "Fastus", has a pair of blessed gloves that she believes Satan, once grabbed by them, will not be able to escape, thus allowing the group to extort wishes from him.) Let the games begin....

I mentioned Bill Willingham (Creator of FABLES and PROPOSITION PLAYER) earlier, and that's probably the most apt comparison that I can make to give you an idea of what DEVIL DEALERS is...Its horrific theme is tempered by a gentle, almost comedic wit and good humor that put me in a FABLES frame of mind...The cartoony art, by Brett Wood, keeps things sunny, despite the potentially serious subject matter. This is a book that would be right at home at Vertigo. (At least, it would have been, back in Vertigo's heyday. I'm not so sure about how it would fit into the decimated, shadow-of-its-former-self Vertigo that we have these days.) There were parts of the book that seemed a little rushed, but overall, DEVIL DEALERS is a fun way to kill an hour or so.

Ross May provided a review copy.

Posted by The Crabby Reviewer at 10:45 PM