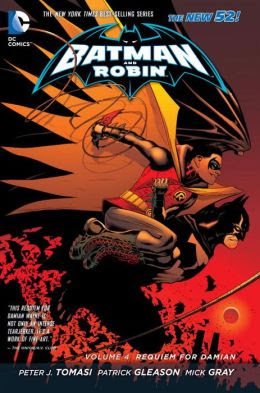 Since the book is called "Requiem For Damian", I'll dispense with my usual SPOILER WARNINGS!!!!!     (Ahhhh, I just did one anyway. Consider yourself warned!)

DC's maddening collection policies have robbed Damian Wayne's death of any weight, so it was odd coming into this collection pretty much cold....I read Damian's death scene over seven months ago (Review HERE), and there's been hardly an emotional blip in the collected DC universe. Barbara (Batgirl) Gordon glossed over if briefly in one of her recent collections, but with the main Bat-book doing an extended flashback that left their only post-Damian issue uncollected, this is the go-to book for Bat-grief.

And what grief it is! Batman is MAD!!! Batman SMASH!!! Batman get all dark and angsty!!! Because we've never seen that before, right....? Given the high level of acclaim that I see this title getting (Which, having read three of the four volumes, I just don't get....), I expected a little better of Bruce and company. Maybe real, human emotion? Nah, none of that. (At least until the final pages, which delivers a heart-rending scene of Alfred grieving over Damian's death.) I thought that this volume, while still delivering the prerequisite action, might see the members of the Bat-family, scattered and distrustful of Bruce after their capture by The Joker, drawn back together and made into a tighter, more cohesive unit. No. Bruce just smashes stuff and beats people up, various Bat-family members try to stop him, and he yells at them. Healing...? Who needs that when you can BEAT PEOPLE UP???

This is fairly awful stuff. The art, by Patrick Gleason and Mick Gray, is serviceable, but it's done no favors by the rote, mindless storytelling. I won't even get started on the wonky "NEW 52" timeline that frequent "crabby readers" must be tired of hearing me complain about by now. I'll just shut up and move on.


Posted by The Crabby Reviewer at 2:41 PM