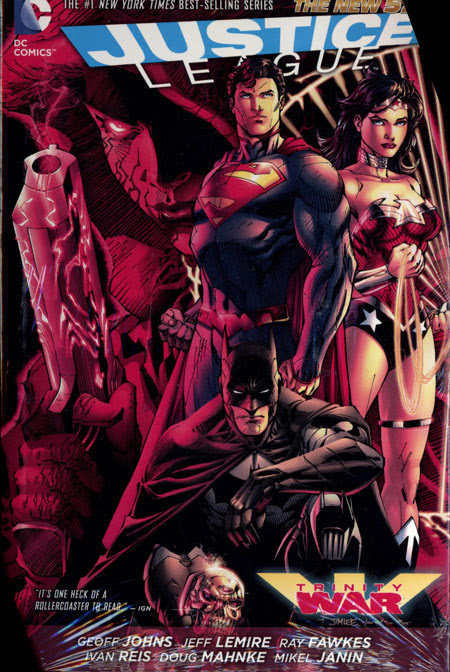 Wow. Is this the shittiest crossover ever.....?

Ummm...I honestly don't know. SECRET WARS II was pretty bad. But this is pretty damned close to being the worst crossover ever. It's certainly the most pointless.

The crossover ostensibly centers on Pandora, the chick that opened up the box that unleashed all of the evils of the world on mankind. (She supposedly had a hand in creating the "New 52" universe, but that's not touched upon here at all.) She was made immortal by the Gods as punishment for opening the box, and now she must roam the earth witnessing the evil that she allowed to be free run wild. Now, after eons of thinking it over, she's decided that getting the box back AND OPENING IT AGAIN will make everything alright.

In the midst of all of this fighting, you can actually see the DC editorial staff swoop in and change the crossover right before your startled eyes. The crossover goes from being about Pandora to being about THE NEXT CROSSOVER, and ends (Quite spectacularly and cinematically, which pretty much provided all of the enjoyment that this volume gave me...) with yet another cliffhanger that dovetails into the next crossover, FOREVER EVIL, which sound like an evil clothing store for teenagers.

The big reveal of exactly what Pandora's Box is flies in the face of what we've read about it so far. (If it was actually a transportation device to get people back and forth from Earth 3, why did we just spend a few hundred pages watching the very real embodiment of The Seven Deadly Sins of Mankind manipulating The Justice Leagues? Also, what the fuck happens to The Seven Deadly Sins...? Pandora kills one, and is getting ready to polish off the rest, and then...poof! Dropped plotline!) But that was just one of many complaints that I had about this horrid, shitty book. Among the other complaints were:
Why does Pandora look EXACTLY LIKE ZEALOT? Is she supposed to be the "New 52" version of Zealot?
Why did DC change The Question from a regular man to an immortal dick that did something so terrible that they can't even mention it?
Why did they ruin The Phantom Stranger by giving him a definitive origin?
Why, if The Martian Manhunter pretended to be Catwoman and faked his/her death to infiltrate The Sercet Society, did he not maybe FUCKING TELL ONE OF THE 50 OR SO OTHER HEROES THAT WERE HANGING AROUND DURING THIS BOOK "HEY, GUYS...THERE'S A HUGE PLOT AGAINST US BEING DREAMED UP BY FUCKING ALFRED FROM ANOTHER EARTH!!"....?
How does Wonder Woman know about Earth 3?
Why did evil Aquaman dies as soon as he crossed over, but no one else did? (Even EVIL Aquaman gets no respect!)
How can The Atom be revealed as a heartless skank traitor from another Earth when we just saw her, in her private life (See JUSTICE LEAGUE, VOLUME 4: THE GRID, review forthcoming) feeling conflicted about spying on The League? She seemed so nice!

Aside from that, there's also the absolute worst John Constantine story ever.....
He becomes Shazam.
Let that sink in for a bit.
I sort of wish that Alan Moore was dead, so we could all hear him roll over in his grave.
But more on that when I review the CONSTANTINE, VOLUME 1: THE SPARK AND THE FLAME trade tomorrow, or whenever I can muster up the motivation. (The Constantine as Shazam story also ends on an unresolved cliffhanger, but John shows up again later, hale and hearty, with no explanation whatsoever.)

This is bad, really REALLY bad stuff. The good news is, you at least get a LOT of bad stuff for your $29.99, as JUSTICE LEAGUE: TRINITY WAR collects 12 full issues, an assload of variant covers (Including a bunch that interlock to form one big image, which DC was too lazy/stupid/cheap to actually put together on one page so we could see THE WHOLE THING.), and all of the regular covers.


I'm 43 years old. I've been reading comics for over four decades, and I can honestly say that DC's "NEW 52", with it's endless crossovers, has given me such a sour taste for DC's product that they're going to be hard-pressed to get me to buy any more of that product in the future. I get a lot of DC books to review (This was not one of them.), so I may look in on "THE NEW 52" from time to time, but they're gotten me to the point where I just don't give a shit what happens next, which has always been the crux of my comic reading habit: WHAT HAPPENS NEXT...? When you make it so that all that happens next is that there's another crossover, you make your audience stop caring. I have officially stopped caring about any of DC's characters. I have a review copy of FOREVER EVIL on deck, so I'll be there for that, but going forward, I think I'll just pocket the money that I used to spend on DC. For this reader, "The New 52" has been a dismal failure.

Posted by The Crabby Reviewer at 9:39 PM