Batman, Vol. 5: The Rules of Engagement 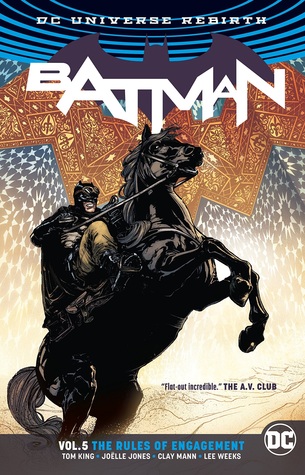 A return to form for Tom King's BATMAN.


I've (mostly) loved Tom King's run on BATMAN, except for the last volume, THE WAR OF JOKES AND RIDDLES, an unnecessarily long flashback that consumed a whole trade paperback and accomplished nothing aside from dragging out the tension of the Bruce Wayne/Selina Kyle marriage proposal cliffhanger.

BATMAN, VOL. 5: THE RULES OF ENGAGEMENT is a fine return to form for what has been (again, mostly...) an outstanding take on Batman. This volume collects BATMAN #'s 33-37, and BATMAN ANNUAL #2. The first storyline finds Batman and Catwoman confronting Batman's ex, Talia Al Ghul, who is harboring a mass-murderer responsible for over 200 murders, which have been pinned on Catwoman. The next arc is a double-date night, as Bruce and Selina hit the county fair with Clark Kent and Lois Lane. The book wraps up with an emotional, decades-spanning look at the Bat/Cat romance.

I'm a skeptic at heart...I've been reading comics for almost all of my 48 years, and I have VERY strong doubts that DC will let Batman get married, let alone that they'll let it stick. There's a bit in this book where Bruce and Selina disagree on where they first met (Bruce thinks it was on a boat, Selina remembers it as being on the street) that makes me think that this is all going to be swept away in one of DC's multiversal shenanigans, and that suspicion was only strengthened later on in the same story, when a dying, elderly Bruce Wayne advises Selina to seek out Barry Allen, and have him find another Bruce, from another Earth, who was still alone, and have him brought back to take care of Selina.....Could Tom King have been writing about a Batman from another Earth this whole time...? I wouldn't be surprised....after all, we have three different Jokers running around, and there's the whole DOOMSDAY CLOCK series. As someone who has pretty much been squeezed out of most current comic books, I really don't care anymore....Tom King is telling an emotional, touching story here, and I'm going to stick around to see how it plays out. Highly recommended. (I could, however, live without Catwoman constantly saying "Meooooow.")

Posted by The Crabby Reviewer at 1:42 PM