To Infinity...AND BEYOND!!!, Part Fourteen: The Infinity Crusade 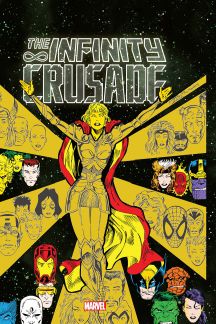 I've heard a lot of trash talked about THE INFINITY CRUSADE in the twenty-five years since it was originally published, and...I get some of it. But really.....this hardcover collects the sixteen issues that form the core of the event (THE INFINITY CRUSADE #'s 1-6, THE WARLOCK CHRONICLES #'s 1-5, and WARLOCK AND THE INFINITY WATCH #'s 18-22), and each and every one of those issues was written by Jim Starlin. So, yes......there is some padding. There are digressions and sidetracks and some Warlock navel-gazing. BUT....you're getting some fine writing, and a few characters, namely Warlock, Thanos, and The Magus, that no one BUT Jim Starlin can do justice to.

Adam Warlock's brush with omnipotence in THE INFINITY GAUNTLET saw him purge himself of his good and evil sides, which led to his confrontation with The Magus in THE INFINITY WAR. Here, we get the flip side of the coin, as Adam's female side, who modestly christens herself "The Goddess", sets out to use The Magus' cosmic containment units to rid the universe of all evil. Yeah, it sounds pretty good, but it wouldn't be a crossover event if there wasn't some kind of drawback......

I won't spoil just what the ultimate plan of The Goddess is, but she starts out by preying on the more moral and God-fearing heroes of The Marvel Universe, using their belief in a higher power to gain control over their minds.

This was when Marvel started to get tricky with their events, since you wouldn't be getting the full story just by buying the event mini-series......There were also happenings of varying degrees of importance occurring in WARLOCK AND THE INFINITY WATCH, and they even created a NEW mini-series to run alongside THE INFINITY CRUSADE, named THE WARLOCK CHRONICLES, which would have made absolutely zero sense to anyone who may have tried to read it on its own.

The main storyline moves along briskly enough, and Starlin, as always, handles his large, diverse cast extremely well.  Each character acts in character and speaks in their own distinctive voice. The art , by Ron Lim and Al Milgrom, is top-notch, and we get a liberal dose of Thanos, which is always a good thing. The WARLOCK AND THE INFINITY WATCH issues tell interesting side-stories, but some of the issues are hampered by Tom Grindberg's muddy art. As for THE WARLOCK CHRONICLES....I'm at a loss to explain the need for this mini-series, except to describe it as a cash-grab. The third issue tells a fairly necessary story, as Warlock and Thanos bargain with Mephisto for intelligence about The Goddess. The rest of the five issues presented here (There were eight issues in the mini-series) are all mainly navel-gazing, and involve Warlock struggling with his internal demons. Starlin manages to make most of this fairly interesting, but......it's all padding. I pity the poor fool who bought all eight issues of this mini-series thinking that they were going to get a complete, cohesive story.

You can tell that Starlin was starting to run out of steam by this point in The Infinity Trilogy, but this was my first time around with this material, and I enjoyed it, for the most part.

THE INFINITY CRUSADE earns a respectable seven out of ten lemniscates:
∞∞∞∞∞∞∞

Posted by The Crabby Reviewer at 3:30 PM