To Infinity...AND BEYOND!!!, Part Ten: The Infinity War 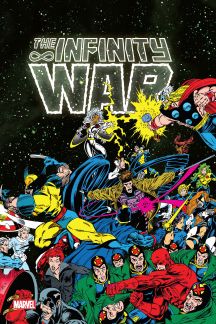 In which I use The Time Stone to send you back two years, to an earlier review of the exact same material......

I originally reviewed the trade paperback of THE INFINITY WAR here, and the bulk of that review pretty much sums this hardcover up. This volume only has the six issues that tell the main story. I assume that the rest of the trade's contents will be in another of this box set's volumes, which are still shrink-wrapped to prevent me from peeking.

Two years later, I think I enjoyed the story a little bit more. Yes, the plot is still muddled and convoluted, but the sheer momentum that author Jim Starlin brings to the story is admirable. THE AVENGERS: INFINITY WAR may have been an adaptation of THE INFINITY GAUNTLET, but I suspect that the filmmakers got the inspiration for their nonstop action from this book. From the very beginning, Starlin and artists Ron Lim and Al Milgrom never let up, and the finale, which jump-cuts from one massive battle to another with no letup, really brought to mind the finale of the film. The Marvel Cinematic Universe owes a huge debt to Jim Starlin...I hope they're paying him well.

Thanos remains one of Marvel's best characters, hero or villain, and he is never better than he is under Jim Starlin's watch. He shines brightly in this collection, and I'm looking forward to future volumes in the box set, which will be collecting material that is completely new to me. Stay tuned....

Posted by The Crabby Reviewer at 9:38 AM