Blu-Ray Review: The Beast Must Die!, from The Amicus Collection by Severin


Hammer films get all of the attention, but, in my opinion, Amicus delivered the better films.

(Stand by while I take a beating from the Horror fans out there....)

I grew up watching Hammer films on channel 5 on Saturday afternoons in The Bronx, so I'll always have a soft spot for them. That said......A lot (Most?) of Hammer's output is, let's face it, sub-par. If Christopher Lee and/or Peter Cushing isn't in it, it's generally safe to skip it, or fast-forward to the good parts. Amicus, on the other hand....I've rarely been disappointed by one of their films.

I first encountered THE BEAST MUST DIE! at the tender age of 11. I was raised by a struggling single mother, so most nights found us at my grandparents house. My grandfather would pick me up from school, my mom would take the bus over after work, and we'd have dinner and dessert, then gramps would drive us home. On this night, New York City was on the receiving end of a pretty significant snowfall, and my grandfather didn't want to lose his parking spot (A precious commodity in The Bronx!), and walking to the bus, about a quarter-of-a-mile away, didn't seem too inviting.

My mother hit the bedroom to watch THE WINDS OF WAR, and my poor grandfather sat down to watch THE BEAST MUST DIE! with me in the living room. (My grandfather was nothing if not accommodating to my obsession with unusual cinema. This was a blue-collar man who had been raised on Bogart, Robinson, and Gable, and he routinely took me to see such grandfather kryptonite as: KING KONG, BUG, GODZILLA VS. MECHAGODZILLA, PREDATOR, FIREWALKER, SUPERMAN, THE THING...the poor man had a glass eye, but he took me to see some awful 3-D movie that must have been a complete blur to him for 90 minutes. On one memorable occasion, he drove to the movie theater to yell at the manager for not selling me a ticket to see DAY OF THE DEAD because I was under 17, and then he took me back the next day and SNUCK ME IN to see it. His comment after seeing the zombie film that changed my life: "It was pretty funny. They didn't have films like that when I was your age.")

But I digress....back to the living room, and THE BEAST MUST DIE!.

My main takeaway from that night was the film's infamous "Werewolf break". Towards the end of the film, the movie stops, and the viewer is given a chance to guess the identity of the werewolf. The Director hated this, and it was put into the film without his knowledge or consent. But if that's the main thing that I remembered about the film after three and a half decades, maybe it wasn't such a bad idea after all.

The film follows filthy-rich big-game hunter Tom Newcliffe as he assembles an eclectic group of guests at his estate for...? Well, I'm not sure what pretext he used to get them there, but his real reason...? Pure horror gold! Newcliffe has hunted and killed just about everything under the sun, so what's left to kill? A werewolf! Which he suspects one of his guests of being. Talk about awkward dinner conversation....

There's a lot to like in this film, if you have the attention span to survive a largely creatureless creature feature. The werewolf is seldom seen, and when it is,,,? It's a dog. No, it's actually a dog. With some extra fun throw on, and occasionally filmed with a red filter to make it look less friendly. (By all accounts, it was a very friendly dog, and the filmmakers really struggled with how to make him look bloodthirsty.) There are some good actors milking the drama from the whodunit scenario, and there is a lot of fascinating dialogue as to the nature of lycanthropy. Peter Cushing plays one of the houseguests, a werewolf expert who offers up a lot of expert opinions and facts. The 1970's funk soundtrack is catchy. Despite the lack of creature effects, there are some very effective shots that are worth checking out. 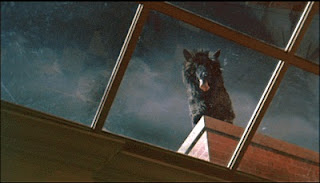 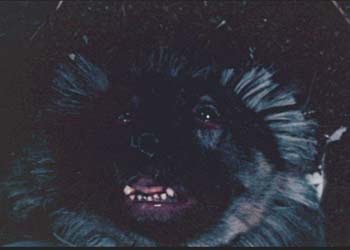 The star of the film is Calvin Lockhart, who portrays Newcliffe with the volume cranked up to 11+. Lockhart doesn't just chew the scenery, he eats it up, shits it out, and then picks it up and flings it at you. Love or hate this movie, it's all going to ride on how tolerant you are of Lockhart's performance. I can't recall ever seeing him in another movie, so I don't know if he was always this loud and over-the-top, or if it was just here....but I loved it. He kept my interest up during the slower parts of the film with his crazy antics.....Check out some of the hollering in this clip:

This new blu-ray is only available as part of Severin's THE AMICUS COLLECTION box set. The back cover of the movie says that the film is "now fully restored" from vault elements. The vault must have had a really shitty print of the film, because it looks like garbage. This is probably the worst-looking blu-ray that I've ever seen. The disc includes the film's theatrical trailer, which is probably 100 times better-looking than the film itself. I'm not usually a nit-picker about film quality, but parts of this film were so grainy and scratchy that even I took notice.

The extras are sparse- There's a fun little interview with director Paul Annett, and he contributes a commentary track, and there's an audio essay by Troy Howarth called "And then there were werewolves" which goes on a bit too long, but is fairly interesting and informative.

I sprung for the boxed set, so I'll post the occasional review as I make my way through the films and the book. Here's hoping the rest of the discs look better than this one.

THE BEAST MUST DIE! earns a shaggy eight out of ten friendly dogs disguised as wolves:
🐺🐺🐺🐺🐺🐺🐺🐺

Posted by The Crabby Reviewer at 11:40 AM