I never read this title as a kid.
Now I know why.

Not to disparage the awesome work of Jack Kirby, although my appreciation of his talent was not acquired until I had already become an adult. Kirby's writing and art on MACHINE MAN are just fine. Unfortunately, he departed the book after issue #9 to go to Hollywood and work on the FANTASTIC FOUR cartoon, which resulted in a relaunch with issue #10, after a brief hiatus.

The Kirby era of MACHINE MAN was basically one long, breathless run for the poor title character, who is still on the lam following the cancellation of 2001: A SPACE ODYSSEY. MACHINE MAN #1 picks up right where 2001 #10 left off, and never looks back. (In fact, there is NO mention of 2001 whatsoever, until a brief footnote in MACHINE MAN #19, his final issue.) Kirby's section of the book basically consists of MM fighting an alien robot named Ten-For, and clashing with an all-encompassing criminal empire known as "The Corporation". There's enough energy, bombast, and big concepts in the Kirby half of the book to make it a fun ride. Kirby leaves halfway through, though, and his Corporation subplot is left dangling, to be picked up and put to bed in the pages of THE INCREDIBLE HULK, which featured a three-part MM/Hulk crossover written by Roger Stern. (Aha! So that's why Machine Man and 2001 were included in this HULK marathon!)

The HULK issues are a lot of fun, but the good times are short-lived, as MACHINE MAN returned after a few months off with issue #10, under the stewardship of writer Marv Wolfman and artist Steve Ditko. Wolfman's stories are stultifyingly dull, and Ditko's art is often uninspired. (At least two of the Ditko issues end with what should have been explosive finales, which are described in the text, but omitted entirely in the art....almost as if Ditko had something against explosions being depicted.) I remember picking up the final issue when I was 9, most likely because of the gorgeous Frank Miller/Terry Austin cover: 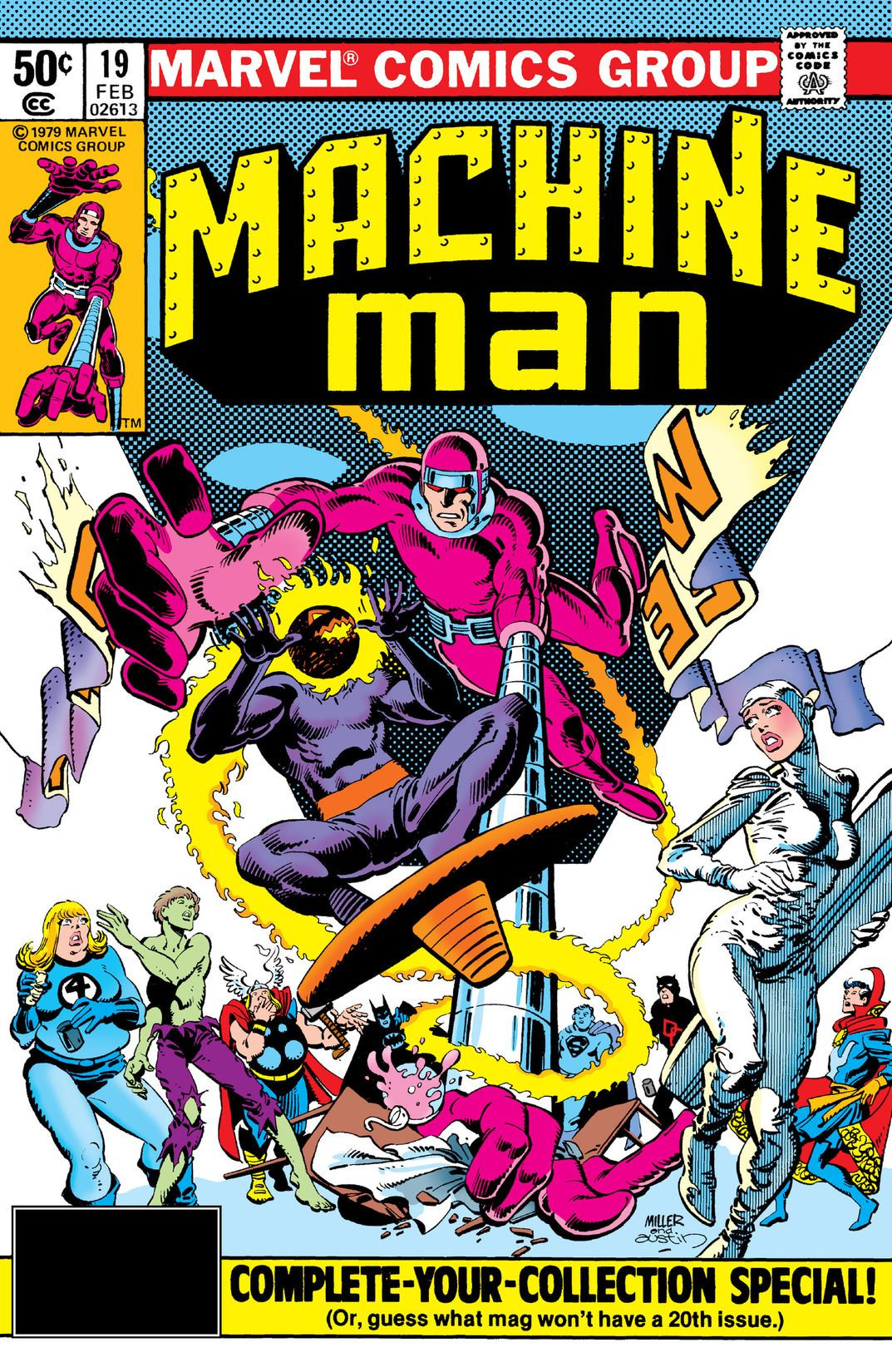 The issue itself failed to impress my nine-year-old self, just as it failed to impress me at forty-seven. (It did, however, introduce Jack O'Lantern to the Marvel Universe.) The last few issues of the series sees the writing job being taken over by Tom DeFalco, but it's still a tough go.....There's barely any supporting cast to speak of, and Machine Man himself is kind of a dud in the personality department. He's also got a temper that would make Wolverine say "Hey, calm down, man!", going apeshit and beating enemies nearly to death on more than one occasion. I noticed a few years ago, when rereading the first few issues of THE NEW TEEN TITANS, that Marv Wolfman's writing was a lot less readable than it was when I was a kid, and the stories he did for MM bear out the conclusion that Marv Wolfman is just not for me anymore. I can't help but wonder if Marvel would have been better off just letting Ditko write and illustrate the book when Kirby left.....it couldn't have been any worse than the Wolfman collaboration turned out.

MACHINE MAN BY KIRBY & DITKO: THE COMPLETE COLLECTION is not a complete dud, but it certainly gets worse as it inches closer to it's mercy-killing cancellation with issue #19. By the end it was a real chore to keep reading.

Posted by The Crabby Reviewer at 6:29 PM