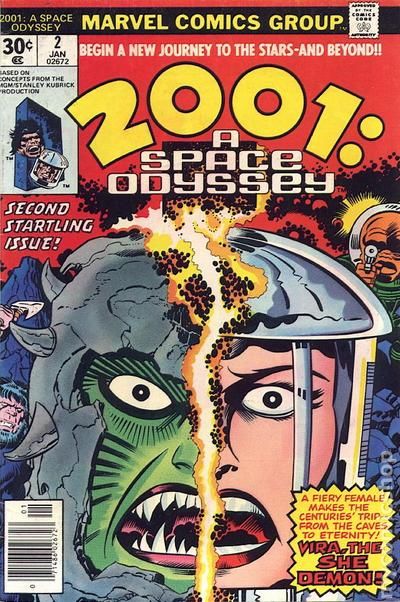 2001: A SPACE ODYSSEY #2 is quintessentially Jack Kirby, yet he still manages to evoke the vibe of the movie that inspired it.

This issue is basically a female-centric version of the last one: A cave-woman named Vira is up shit's creek, and uses her smarts and toughness, with a little bit of help from The Monolith, to put one over on the tribe and become the first female president of the cave.

We then do the now ubiquitous 2001 flash-forward to, you guessed it, the year 2001, where we find a female astronaut marooned and pursued by evil aliens. She takes refuge in a cave, finds The Monolith, and becomes a floating baby.

Entertaining delivery, but the same story is getting old after only two issues. We'll see where Kirby takes this. Come along and join me as we head into the far-flung future of.....2001!!!!