The still-shrinking Hulk takes a detour on a microscopic barbarian world, before continuing on to another teensy-weensy sojourn with his true love, Jarella. This time, Jarella finds herself transported back to Earth when the big guy is rescued by General Ross and Doc Samson, which sets up a few issues that were a wonderful departure from the emerald status quo: Jarella getting used to life on Earth, and falling in love with Bruce Banner. Of course, this can't last, and Jarella meets an untimely end, which sends The Hulk spiraling off into a grief-induced rage, and squaring off against his occasional teammates, The Defenders. Writer Len Wein serves up some poignant stuff that is sure to tug at the heartstrings of even the most jaded reader. Seeing the living embodiment of rage reduced to helpless tears as he realizes that the love of his life is gone forever, beyond even the abilities of Doctor Strange.....tough stuff. High marks to artist Sal Buscema for giving us a visual interpretation of The Hulk that we've rarely, if ever, seen.

This watershed moment is followed by some truly pedestrian stuff, as Wein slowly runs out of steam and begins to tread water. There's a bizarre two-parter with Doctor Druid, a battle against The Absorbing Man (Which is the first issue of THE INCREDIBLE HULK that I remember owning as a child), encounters with The Constrictor, The Quintronic Man, Jack of Hearts, The Bi-Beast, The Ringmaster and The Circus of Crime, a Doc Samson solo tale pitting him against The Rhino, another bizarre two-parter that finds The Hulk facing Captain Barracuda and encountering Robinson Crusoe (!!!!????), a clash with Stingray (On dry land, of all places!), a creepy horror tale penciled by Jim Starlin, and the epic return of The Hulk's archenemy, The Leader. 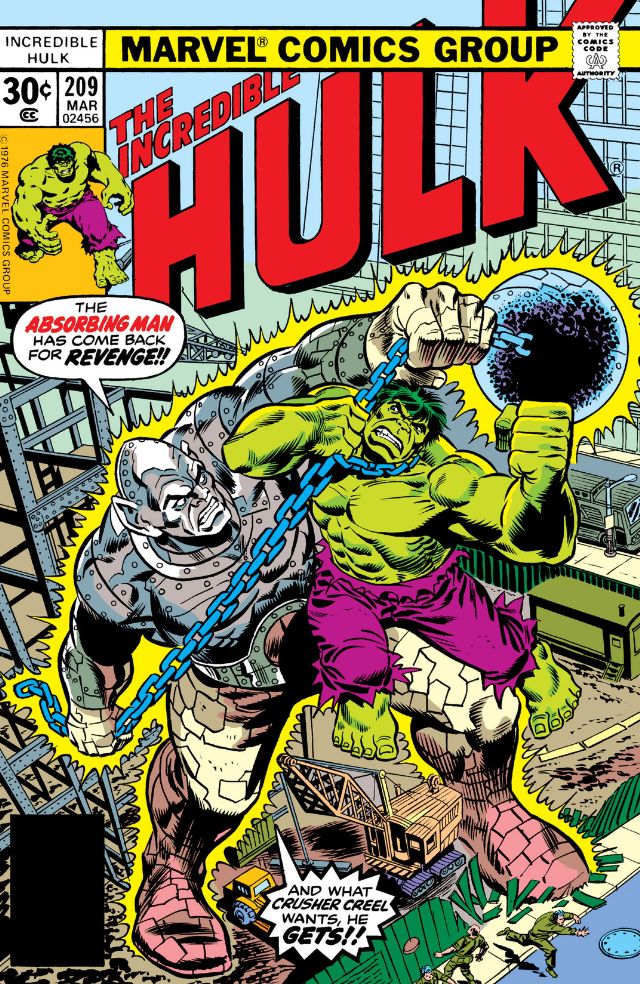 The infamous eyepatch/periscope panels from issue #219.

As I said earlier, you can feel Writer Len Wein running out of gas as this collection progresses. That's not to say that the stories are bad, but the innovative feel that he brought to the book is gone. Luckily, Roger Stern takes over for the last few issues in this volume, and his work is like a breath of fresh air.

Penciler Sal Buscema is at the top of his game in this collection, and with the aid of some stellar inkers, including Joe Staton, Ernie Chan, and Josef Rubenstein, his work has never looked better.

ESSENTIAL HULK, VOL. 6 is a solid volume, and points to better things ahead in the next volume.

Posted by The Crabby Reviewer at 1:03 PM