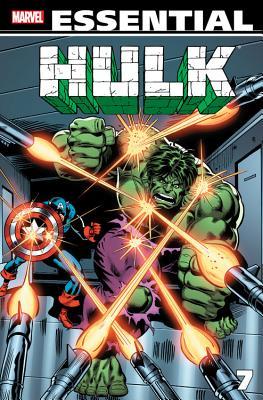 Oddly enough, this volume ends right where I starting actively collecting THE INCREDIBLE HULK as a kid.

This volume starts exactly where the last one left off: With The Hulk pounding the living snot out of Doc Samson. From that auspicious beginning, our jade hero goes on to visit a college campus, team up with The Angel and Iceman to battle The Master Mold on a space station, submit to psychoanalysis, butt heads with Moonstone and an agriculturally-minded alien, team up with/fight Captain America, Quasar, The Falcon, and Machine Man as they wage war against the criminal cartel known as "The Corporation", battle Alpha Flight's Sasquatch in the Canadian wilderness, fight The Goldbug, discover the fabled city known as El Dorado, encounter one of his oldest enemies, wrap up the plotlines of a cancelled Marvel book, and clash with Captain Marvel as he attempts to take his beloved Jarella back to her home for burial.

Most of the book is pure "HULK SMASH!", but writer Roger Stern does an admirable job of keeping the book filled with enough familiar supporting players to make the proceedings seem fresh and vital. There's a loooong  multi-part story involving El Dorado that really outlasted its welcome (I was about ready to gnaw through my wrist when I saw that it was going to go on for another issue after it seemed to be done), but the book moves along briskly, for the most part. Stern leaves just in time, as you can really sense him running out of gas somewhere during the El Dorado debacle, and he is replaced by Bill Mantlo, who begins his long HULK tenure towards the end of this volume.

Mantlo gets thrown into the deep end of the pool right away, inheriting Stern's dangling plot thread regarding the corpse of Jarella, The Hulk's love from a microscopic planet. He does a fine job of humanizing the monster, showing us once again how much he loved Jarella. The book ends on Jarella's planet, with The Hulk having not only laid her to rest, but also saving the beleaguered remnants of her people.

Overall, a solid entry in the history of everyone's favorite green giant. ESSENTIAL HULK, VOL. 7 earns a solid seven out of ten peanuts, in honor of guest-star President Jimmy Carter:
🥜🥜🥜🥜🥜🥜🥜

Posted by The Crabby Reviewer at 8:42 PM