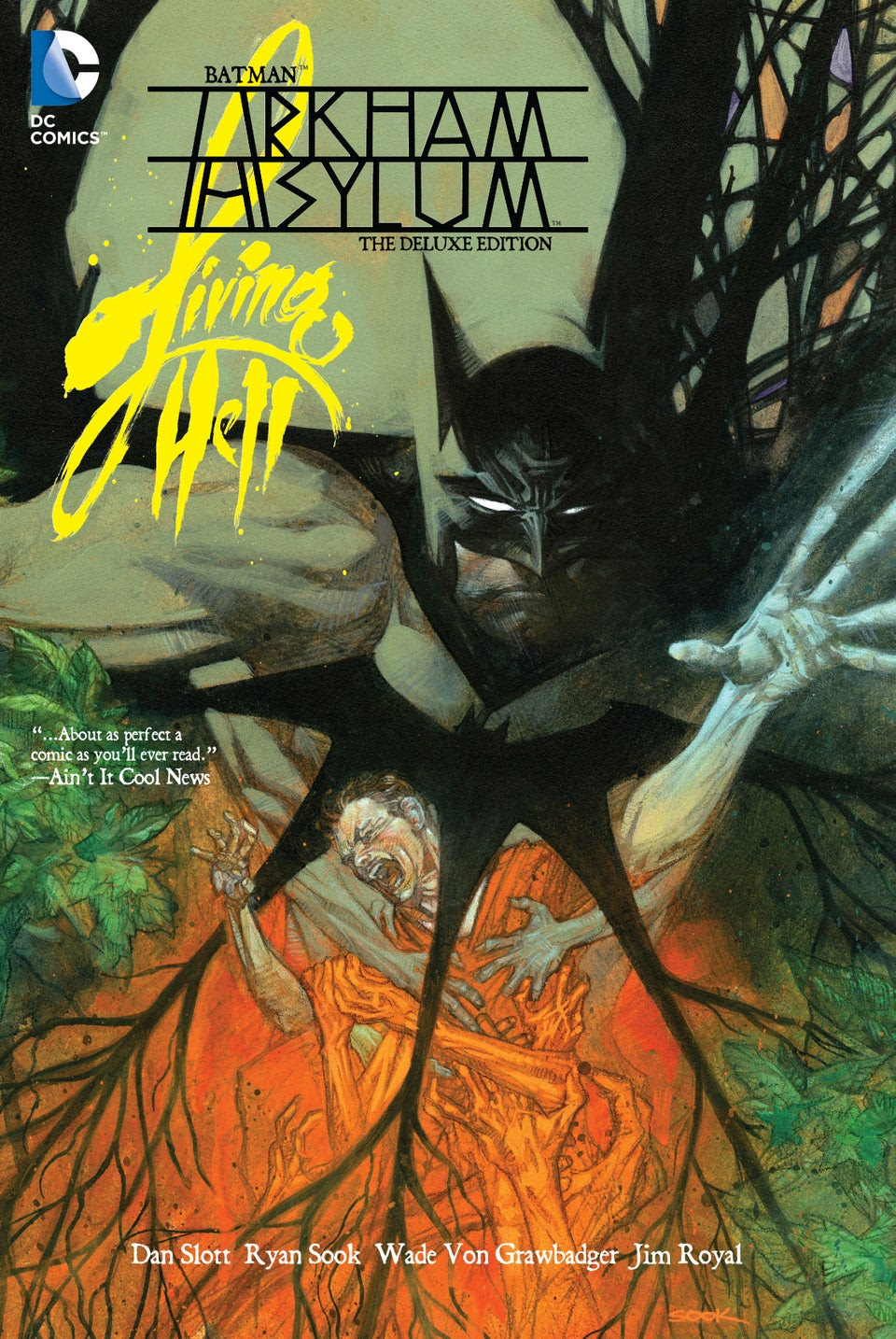 The book with more colons in the title than any other Batman collection!

I bought the original ARKHAM ASYLUM: LIVING HELL in one six-issue fell swoop 11 years ago on one of those slow weeks at the local comic-store...you know, the kind where hardly anything good came out, and you actually feel  mildly depressed that you're not going home with enough comics. I was intrigued by the Eric Powell covers, and the premise had already been calling out to me, so...I took a chance, and was rewarded by one of the most thoroughly entertaining Bat-books I had read in a long time. I remember thinking "This Dan Slott is a guy to watch....". DC never really did much with him, but I hear the guy is doing pretty well at Marvel, so it looks like I know how to pick 'em.

Now, eleven years on, DC has released a gussied-up deluxe edition with a lot of colons in the title, BATMAN: ARKHAM ASYLUM: LIVING HELL: THE DELUXE EDITION, which collects all six issues of the mini-series, complete with covers, sketches and text pieces, and a cute bit about an easter-egg that some readers may have missed. There's also a stunning new wraparound cover by artist Ryan Sook, which is highly unusual, since most collected editions cheap out where new cover art is concerned, which is a shame....back in the day, trade paperbacks always had new cover art.

The story itself is refreshingly Batman-free...The Dark Knight is only featured on one cover and about six or seven actual story pages. The high-concept of the book is "Oz at Arkham Asylum"...OZ as in the brutal HBO prison drama, not Oz as in "Wizard of...".

The gateway character is Warren White, a rich scumbag who, having stolen a fortune from investors, cops an insanity plea that keeps him from prison, depositing him instead at the "Arkham Asylum for the Criminally Insane", the repository of every kook and scumbag in Gotham City.

Not a good move.

White, known as "The Great White Shark" due to his ruthless business dealings, is the reader's P.O.V. into the world of Arkham Asylum and it's internal politics....White soon finds himself sharing a shower (And some dropped soap...) with The Joker, becoming Two-face's "Coin Boy", bunking with Humpty Dumpty, and enduring all manner of horrific assaults and personal injuries, both mental and physical.

The brilliance of Dan Slott's story is that, although each issue is more-or-less self-contained, he manages to quietly pull together all of the various threads from the individual stories into a unified, gruesome conclusion. The grand finale takes an unexpected detour into the Supernatural, but it all works beautifully....The art, by Ryan Sook, Wade Von Grawbadger, and Jim Royal, compliments the blackly comedic nature of the story perfectly, and the gorgeous covers, by Eric "The Goon" Powell are the icing on the cake.

DC seems to have gone all out on this one, eschewing their usually shitty cover boards in favor of coated boards that have the same art as the wraparound dust jacket. DC actually seeming to give a shit about the look and presentation of one of their collected editions is...most unexpected. Maybe there is a shred of hope for them, after all.

Posted by The Crabby Reviewer at 9:28 AM