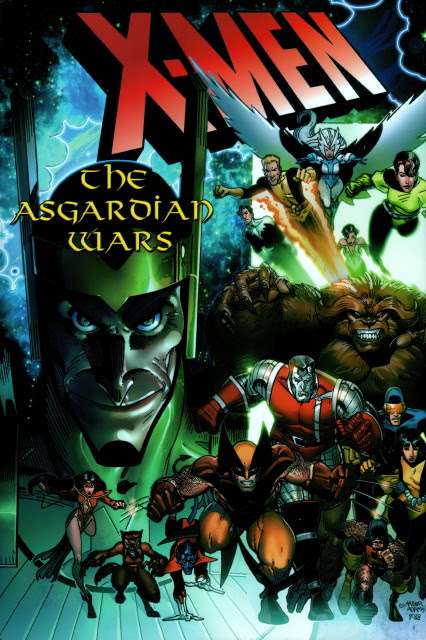 Having read this book, I now remember why my teenaged-self dropped UNCANNY X-MEN around issue #200 or thereabouts.

X-MEN: THE ASGARDIAN WARS collects X-MEN AND ALPHA FLIGHT #'s 1-2, NEW MUTANTS SPECIAL EDITION, and X-MEN ANNUAL #9. There was a time when Chris Claremont's UNCANNY X-MEN was tremendous fun to read, but the issues contained in this volume are well past that time. (I think the good times ended when Claremont and Brent Anderson created the X-MEN: GOD LOVES, MAN KILLS graphic novel, which really kicked the patented Claremont mutant persecution into overdrive, setting the stage for much angst, introspection, and navel-gaving, and enabling Claremont to give free reign to his purple prose fetish.)

I just reviewed X-MEN: ALPHA FLIGHT (Review here), so I won't get into the the first half of this book, which was collected in that volume as well. I'll just say that it was not as good as I remembered it being back in the day.

My younger self was also thrilled with the two tales that round out this collection, while my older, wiser (More jaded and harder to entertain....?) self could barely slog through them. Loki makes good on the vow of vengeance that he swore at the end of X-MEN AND ALPHA FLIGHT, and strikes at the team through The New Mutants, which draws the older X-Men to Asgard seeking to free them from the Trickster God.

The book is illustrated by Art Adams, whose work is always a treat. The detail in his work still astounds, and it's easy to see why I was so taken with these books as a teenager. It was funny to see how one of Adam's visual quirks (Drawing in cameo appearances by characters from other mediums), which enthralled me originally, grated on me as an adult. Adams draws in Remington Steele and Laura Holt, Hagar the Horrible, Martin Short's Ed Grimley character, Popeye, Bluto, Olive Oyl, The Starship Enterprise, and his favorite, Gumby. It was cute nearly thirty years ago, but seeing an extended sequence involving an Asgardian lord who looks and talks like Popeye, or a Frost Giant with pointy hair who keeps saying "I must say!" really frayed my nerves this time out.

And the text and word balloons......oy. Claremont talks and talks and talks and TALKS...characters bemoan their mutant abilities, bloviate internally about their own angst and hidden secrets that must never be revealed, moan and groan and yak and yak and yak...As I said, it's easy to remember why I dropped the mutant books around the time these stories were originally published.

X-MEN: THE ASGARDIAN WARS is an interesting Mutant/Asgardian mash-up, and it's worth it for the Paul Smith/Art Adams artwork (Adams is inked by Mike Mignola in the X-MEN ANNUAL!!), but don't expect much, story-wise. It's a chunky book, though (Around 250 VERY WORDY pages!), so you get a lot of bang for your buck. The collection includes all four covers, a huge section of Art Adams sketches and penciled pages (At 4-per-page thumbnail size, alas...), and Dave Cockrum's cover to the X-MEN/ALPHA FLIGHT: THE GIFT trade paperback.

Posted by The Crabby Reviewer at 11:36 AM