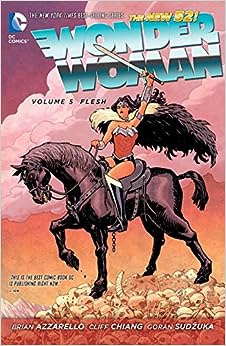 The God (Goddess...?) of War marches on in WONDER WOMAN, VOLUME 5: FLESH, the latest collection of Brian Azzarello and Cliff Chiang's re imagining of the amazon princess.

I've been really high on the Azzarello/Chiang WONDER WOMAN collaboration, going as far as to call it the only "New 52" reboot that's completely worked for me. From what I understand, Azzarello and Chiang will wrap up their saga in Volume 6, which, unfortunately, makes a lot of this volume feel like wheel-spinning and padding before the big finale.

When we last saw Wonder Woman and her intrepid crew, baby Zeke was safe, The First Born had been soundly defeated, and Wonder Woman had just become, unbeknownst to her, the new God of War. WONDER WOMAN, VOLUME 5: FLESH picks up with the origin of The First Born, courtesy of DC's Villain's Month event, and segues into further intrigue from there, as various Gods and Godlings plot and scheme for and against baby Zeke. This is one of those "We just beat the bad guy, but now we have to build him up again for the big finale" volumes, and it shows. While I did enjoy this volume, it doesn't hold a candle to the previous three...it's about on a par with Volume 1, which was good, but not quite great.

There IS a lot of great here, though, especially in the origin of The First Born, which somehow manages to add bestiality to the list of gross things that are now acceptable in The DC Universe. (Seriously...I never considered just WHERE those hyena-headed henchmen came from, and it makes sense, but it's gross.)

The book ends on a high note, as well as something of a cliffhanger, so it looks like Volume 6 will be a great one. When this is all collected in an omnibus, the stories contained in this volume will read just fine, I'm sure. As a stand-alone volume, however, it left a bit to be desired. It's still the best and brightest on "The New 52", though.

Posted by The Crabby Reviewer at 12:04 PM