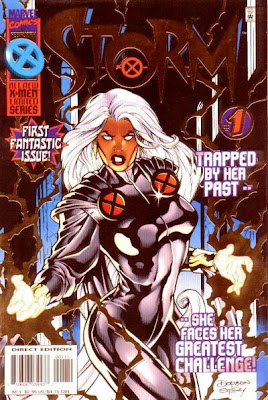 The story is pure 1990's mutant angst....One of the things that turned me off of The X-Men back in the mid-to-late 1980's was how incestuous it was getting. Every relative of The X-Men was also a mutant. Most were eeveeeeel mutants. It was getting to the point where a book would end with the startling revelation that the guy that Wolverine bought a cigar from 13 years ago in Boise is an evil mutant. This is one of those books.

It's steeped in the storylines of the time, so it's not exactly a self-contained read. It has Morlocks who have been raised in another dimension where time moves differently, it has Colossus' brother, who is, say it with me: AN EVIL MUTANT!!!! It has flashbacks to Storm, kind, gentle, loving Storm, RIPPING OUT A MORLOCK'S HEART!!! It has Cable! It ends on a really interesting note that makes you wish that Ellis had STARTED the story at that point. If this sounds interesting, you're wrong. Soooo wrong. This is, probably, the worst collection I've read in a long time, and it's compounded by the fact that this slim volume has a staggering $19.99 cover price! Marvel saw me coming, lured me into an alleyway, and stole my wallet.


Posted by The Crabby Reviewer at 1:55 PM