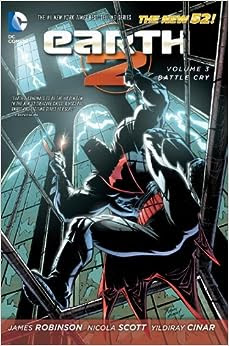 The battle against Steppenwolf kicks into high gear, as Earth 2's "Wonders" take the battle to the isolated nation of Dherain....

Things move a little faster this volume, and there's enough action happening to keep my mind off of the fact that I really don't care for/about any of these characters, aside from Steppenwolf, who is a compelling villain.
We get a new (Or is that old...?) Batman, the mysterious death of Alan Scott's lover gets mysterious-er, we finally get to meet Commander Steel (As boring here as he was in the pre-New 52 DC Universe...), and we get one hell of a battle, complete with an ending that I did not see coming.

The forward momentum of the book is totally derailed by the inclusion of a "Villain's Month" story that made absolutely no sense to me. EARTH 2 #15.1 would, judging from the cover, be more at home in a Huntress/Power Girl WORLD'S FINEST collection, but it's included here, and it's some kind of senseless mumbo-jumbo involving Desaad, Jack Kirby, and other stuff that made me sit and scratch my head in puzzlement. It was awful, and made me take a few points off of the overall package.

Writer James Robinson seems to have quit after this volume, so I have no idea if Volume 4 will be better, worse, or more of the same. I'll find out in a few minutes......

Posted by The Crabby Reviewer at 11:23 AM