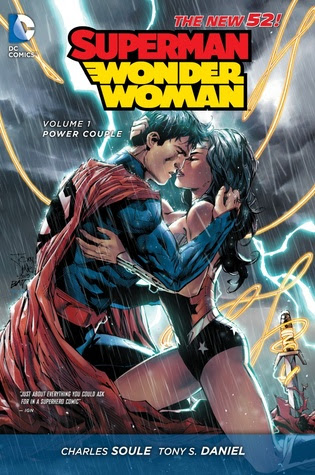 One of the things that has driven me out of my gourd about DC's "New 52" has been the Superman/Wonder Woman romance. I'm an old fart, so I hate seeing Lois Lane relegated to BFF status. I was not expecting to like this book. Yet I did. Didn't love it, not sure I'd pay to read more, but this was a fun way to kill 90 minutes.

SUPERMAN/WONDER WOMAN, VOLUME 1: POWER COUPLE delves a bit deeper into the Clark/Diana romance than I've seen elsewhere, but that's not hard to do, since I've only really seen them interact in Geoff Johns' JUSTICE LEAGUE book, and its assorted crossovers. WONDER WOMAN scribe Brian Azzarello has mercifully chosen to ignore it, but that gets retconned a bit in this volume, as writer Charles Soule uses WW's supporting cast to nice effect, making Apollo one of the book's big bads, alongside an assortment of Kryptonians.

The book opens with a huge smackdown against Doomsday, who has never appeared before in "The New 52", or at least SEEMS to have never appeared. Who knows, these days? Artist Tony S. Daniel manages to fit in DC's requisite amount of unnecessary gore right off the bat, as Doomsday grabs a bunch of Norwegian soldiers and RIPS OFF ALL OF THEIR EXTREMITIES (!!!), leaving them as mere torsos with heads to be tossed at Wonder Woman. (There's also some nice mass decapitations later, including A CAMEL (!!!), and some nameless guy gets his head stomped into pulp by General Zod.) I've complained about this before, but I'll do it again: Do you really need to be SO...FUCKING...GROSS...DC? I'm a big boy, so it doesn't bother me, but I have A)- Disposable income, and B)- Kids that I'm getting into comics. My 11 year-old daughter would probably love Wonder Woman, but, as far as I can tell, there's no Wonder Woman book that would even be remotely appropriate for her.  To say nothing of  my 5 year-old son, who loves superheroes....I can't imagine reading him any DC books. He's getting strictly Marvel, at this point. Grown-up books are great, but have some that are kid-friendly too, maybe?

Anyway, Doomsday vanishes, but he's just a precursor to a larger plot, as we soon find General Zod escaping from The Phantom Zone, and he springs Faora, and they attempt to bring every other Phantom Zone exile to Earth, along with a Warworld. Plus, some nameless person exposes the Supes/WW romance to the world. Who knew it was a secret? Didn't I just see Clark Kent take Wonder Woman out on a very public date in SUPERMAN, VOLUME 4: PSI-WAR...? Who know? Who cares, at this point? "The New 52" is a hot mess, so if you encounter a fairly well-told story, which SUPERMAN/WONDER WOMAN, VOLUME 1: POWER COUPLE mostly is, you've just got to shut off the continuity-detector, along with most of your brain, and simply run with it. I mean, is it really smart for Superman, who is powered by the sun, to piss off Apollo, who just, literally, told Supes that "I AM THE SUN!!!"...? No, probably not. Instead of amping up Zod and Faora's power, Apollo could theoretically just cut Supes off from the sun and watch him waste away...but, whatever. It's a fun book, so it's hard to shit on it too much.

I've said before that I'm mostly done with "The New 52", and I meant it. I enjoyed this book, but would I actually pay to read Volume 2...? Probably not. If you're more accepting of DC's new direction, and you've been enjoying their recent output, this is probably better than most of what you've been reading, so you'll love it.

Posted by The Crabby Reviewer at 9:34 AM