Does BATMAN V SUPERMAN: DAWN OF JUSTICE have what it takes to kickstart a DC cinematic universe...?

Judging from the empty theater I was in, and the empty lobby and parking lot when I left, I would guess not. However, the film seems to be making good money, at least according to Warner Bros. box office report, so there may be hope yet.

Director Zack Snyder, the lead creative guy for DC's fledgling shared film universe, seems to have made up his mind to stick to the grim-and-gritty path that he forged in 2013's MAN OF STEEL. If you liked that film, this is more of the same. If you didn't like it, you're probably not going to feel any differently about this one.

There are going to be SPOILERS AHEAD!!!!!, so read at your own peril if you haven't seen the film yet.


The movie opens with a quick and dirty retelling of Batman's origin (With Thomas and Martha Wayne played by Jeffrey Dean Morgan and Lauren Cohan, currently appearing together on THE WALKING DEAD), and thank God they got that dealt with and out of the way quick. I can't take any more reboot origin films. From there, we get the massive destruction of the MAN OF STEEL Superman/Zod fight from Bruce Wayne's street-level perspective, as he races through Metropolis trying to evacuate his employees from his right-in-the-line-of-fire office building. This is a pretty impressive scene, and really hammers home why Batman comes to feel so strongly that Superman must be taken out at all costs.

Metropolis has been mostly rebuilt since then, but Superman remains a polarizing figure, with some idolizing him and some hating and/or fearing him.

There's a lot of complex maneuvering going on, as Lex Luthor plots to make Superman look even worse than he already does, Bruce Wayne spies on Lex Luthor in an attempt to steal his horde of Kryptonite, and Wonder Woman plays Wayne and Luthor in order to get back a photo in Luthor's possession that could out her as an immortal. Luthor's endgame is to pit Batman against Superman in a battle to the death, which turns into another punishing, city-destroying sturm-und-drang epic slugfest that finds Superman and Batman joining forces with Wonder Woman against Luthor's creation, Doomsday 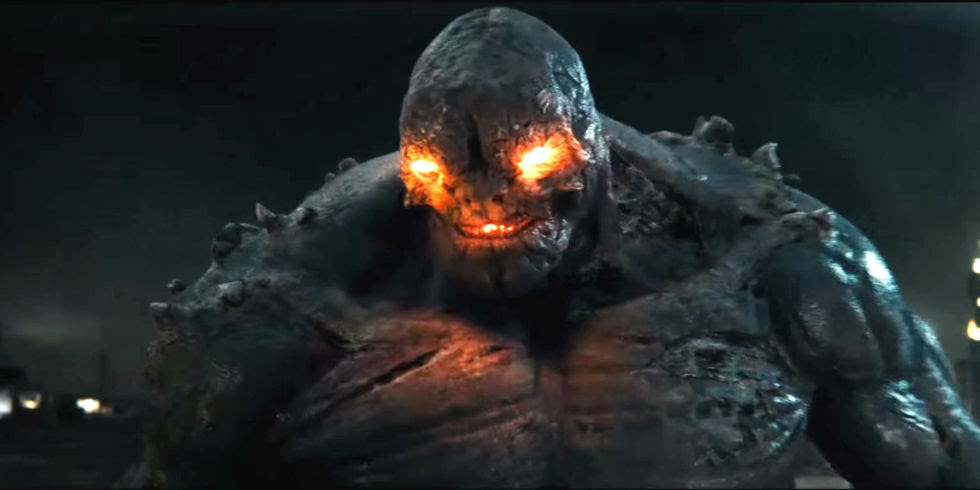 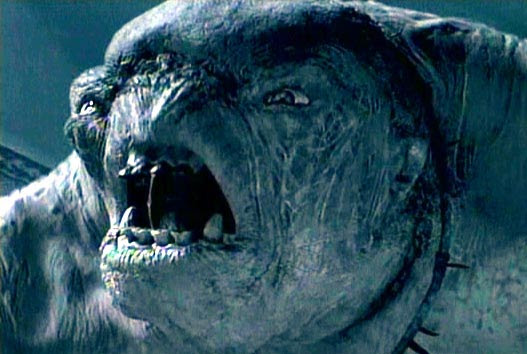 and Mr. Hankey, The Christmas Poo from SOUTH PARK. 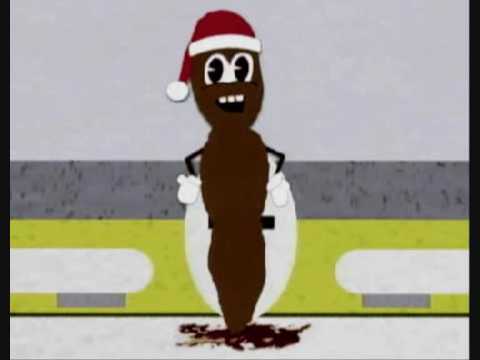 OK, I'll start with the good about this film: Ben Affleck, who I really dislike, makes a great Bruce Wayne, and a really good Batman. He's freakin' HUGE, and his electronically-altered voice sounds a lot better than Christian Bale's ridiculous rasp from the Nolan films.

Jeremy Irons is excellent as a more involved Alfred, and Gal Godot kills it as Wonder Woman. I had my doubts about her, but she carried herself well, and made me believe she was someone who could step up and save Batman and Superman's collective asses. Amy Adams makes the most of her underwritten role as Lois Lane, and she's still incredibly cute, so she'll always get a pass from me...I would, however, have liked to see her kick the shit out of Lex Luthor in their scene together on the rooftop, rather than be relegated to the Margot Kidder "fall off of a building" role. The effects are nice, aside from Doomsday, who looked super phony. (A big part of that is his size...he looks to be about 20 feet tall, and when you see him fighting people who are pretty much up to to his kneecaps, something in your brain just screams out that this isn't real, and it takes you right out of the film. I had the same complaint with Ang Lee making The Hulk so big in his first solo film. It just looks ridiculous.) It was also great to see, for the first time on film, a convincing Batman fight scene, where you could actually see and follow the action. Zack Snyder did a great job of making Batman's fights easy-to-follow, and it was a treat to see him in action.

The bad? Henry Cavill 's Superman is basically a guest-star in what should have been his film. Cavill isn't given much of a character to work with, so he's essentially a hollow shell being put through his paces. He's not given anything to make him likeable to the audience....Christopher Reeve's Superman had human moments, where he interacted with regular people, and smiled and made small talk...made himself feel and appear more human. Cavill's Superman is a dour, tortured alien...he lives with us and looks like us, but he never feels like one of us. Also, there probably should have been a second honest-to-goodness SUPERMAN film before they made this one. When the film opens, Clark Kent is already a mainstay at The Daily Bugle, he lives with Lois Lane, and she knows his secret identity...it seems like we missed a lot, and we never get to see this relationship happen, it just is already. (We do get to see Amy Adams in the bathtub, though, which is nice.) Jesse Eisenberg's Lex Luthor is a little too crazy to take seriously, and who in their right mind would just let a random Billionaire roam around, alone and unescorted, in a crashed alien ship???

It was nice to see the filmmakers take a little more caution in where they set their big climactic battle (They must have stressed that this was a totally empty part of Gotham City about five times, and I got a kick out of the reporter saying that it was lucky the Doomsday attack happened after business hours, so downtown Metropolis is virtually empty.) Batman's plan to lure Doomsday away from metropolis and BACK TO GOTHAM (!!!!) was just retarded. Why not fly back, retrieve the kryptonite spear, and take it back to Doomsday, rather than have a walking weapon of mass destruction follow you across two cities on foot, killing God knows who along the way...?

Another beef, one that I have with almost every superhero film, is the lack of a recognizable theme. Nothing has ever come close to John Williams' SUPERMAN theme, or Danny Elfman's BATMAN. Hans Zimmer and Junkie XL did a good job with the music, but there were, once again, no memorable themes.


My biggest complaint, however, is that the filmmakers just don't understand these characters.....Superman and Batman are both, at their cores, very simple creations:
Batman's parents were killed by guns. He grew up an orphan, and has vowed never to take a life, so no other child would have to grow up without parents because of his actions. He would never use a gun, or take a life, whether it be by his own actions or lack thereof. Batman wouldn't kill his worst enemy, let alone some random thugs; In fact, he would move heaven and earth to save his enemies, if at all possible. This Batman is blowing up cars and killing their occupants left and right.
Superman was raised by adoptive parents who instilled salt-of-the-earth midwest farm values in him, and taught him that it was his responsibility to use his powers for the greater good, no matter what the potential cost to him. This Superman is told, flat-out, by BOTH PARENTS, "Fuck everybody else! You don't owe them shit!" (Not as colorfully or as bluntly as that, but you get the idea.) It adds another level of disconnect between the audience and the character.


There's a scene where Batman just straight-up stabs a guy, which drew a gasp from me. My wife was confused, because I didn't bat an eye at the brutal, Steven Seagal-style bone-breaking that Batman was engaging in just a moment before that. I can accept him whooping someone's ass, but stabbing someone...? Wow. And on the other hand, Superman was REALLY rough on Batman during their fight...I know Batman had an armored suit on, but Supes was hitting to kill....it seemed really out of character, as did his decision to just go and potentially kill Batman rather than try to listen for his mother's voice or heartbeat in order to find her before just taking Luthor's word that she would be safe if he killed Batman.


The way that the rest of The Justice League was introduced was sort of clunky, and didn't really pique my interest in any of the characters. The Flash-inspired vision that Batman had was overlong, and seemed to confuse a lot of the audience that I saw the film with. (I did enjoy the Parademons, though.) The Flash looked like a little kid in a goofy costume, Aquaman looked OK, and they managed to pretty much get the whole Cyborg origin out of the way in one brief scene. The problem that I see with a lot of this is that The Flash is already on TV, played by someone else. Having one Flash on TV and another in the movies may be too much for casual fans to grasp. Yeah, we "get" the Multiverse, but try explaining it to your wife or mother and watch them either get really confused or tune out altogether. On the other hand, Cyborg and Aquaman are two of the most bland, boring characters in comics...the only interesting iteration of Cyborg is on the TEEN TITANS GO! cartoon. Will people be able to accept a whole film about a bunch of people who live underwater without it seeming ridiculous? Jason Momoa has a lot of charisma, so if anyone could make Aquaman watchable, he'd be the one, but they've got their work cut out for them with these two characters. Another worry is that DC is going to arrive too late for the "Super-team fights a gigantic, rock-faced madman from deep space" party.....Even though Darkseid came first, Thanos hit theaters before him, so to everyone who is not a geek, it'll look like DC is ripping off Marvel. These will be interesting things to watch unfold, and I'm curious to see how the audience will react.


I asked my wife what she though of the film when we left, and she said that she was underwhelmed, and that it didn't seem to carry as much importance as they may have intended. We both felt that Superman's death was almost weightless, because we barely knew the guy, and of course Superman isn't dead. The lack of an after-credits scene was also an annoyance....Marvel has audiences so conditioned to expect one that no one moved until the credits were done.


Overall, I saw this film five hours ago, and I'm still not sure how I feel about it. (I had this same reaction to MAN OF STEEL three years ago, and I finally came down on the side of feeling slightly disappointed.) There was a lot to take in...some of it worked, some of it didn't. It'll be interesting watch DC try to forge their own cinematic path, though....I'll be along for the ride to see how things progress, I suppose. I have really high hopes for SUICIDE SQUAD....fingers crossed that DC can pull that one off.

Posted by The Crabby Reviewer at 3:51 PM