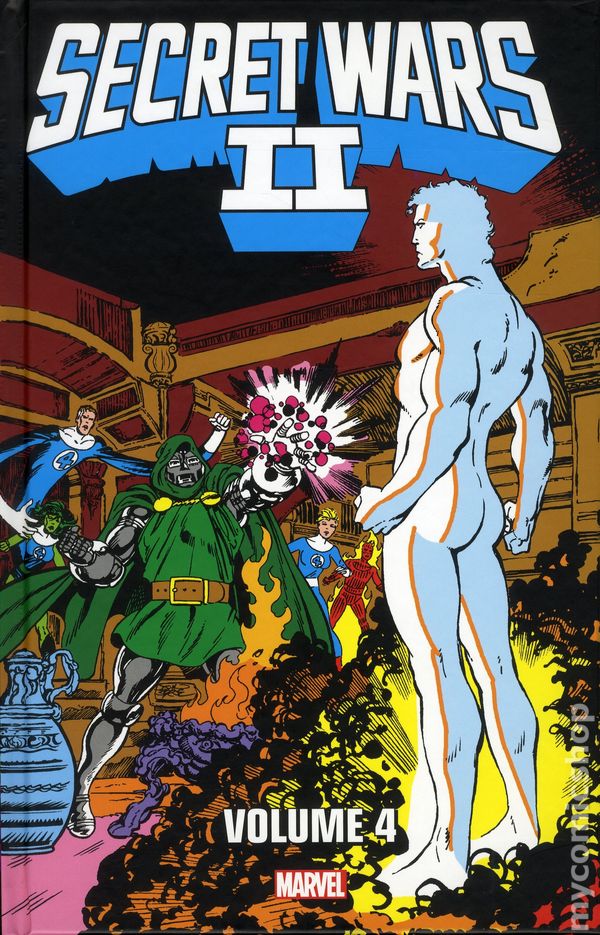 The second war concludes, but a third sneaks up on us like a thief in the night.....

SECRET WARS II, VOLUME 4 collects the final five parts of SECRET WARS II, plus an epilogue, then gives us something that I didn't even know existed: Secret Wars 3. (!!!!)

The book starts off with the uneven AMAZING SPIDER-MAN #274, which finds The Beyonder wagering humanity's future on Spider-Man's integrity. The art is credited, on the splash page, to Ron Frenz and Joe Rubenstein, but there's what appears to be a tacked-on credits box (Added for this collection? I'm not sure....) that throws Tom Morgan, James Fry, Russ Steffens, Jack Fury, and John Romita, Sr. into the art mix. This was a hot mess of a time for the wall-crawler, artistically...I dropped all of the Spider-books around this time because of all the terrible artwork-by-committee, and this issue is a prime example of that era. The story is all over the place, and really adds nothing new to the overly-long SECRET WARS II saga.

Next up is THE AVENGERS #265, where The Beyonder finally throws down with Captain America and company. Good stuff from Roger Stern, John Buscema, and Tom Palmer.

Another Chris Claremont soul-searcher comes next, with The X-Men trying to stop Rachel Summers from ending the universe to spite The Beyonder. I'm glad that I read these issues of UNCANNY X-MEN, so I remember to not buy any collections that go past UNCANNY #200.

John Byrne's pencils look freakin' AMAZING with Joe Sinnott inking him, which makes the continuity-heavy FANTASTIC FOUR #288 much more palatable. This issue seems to have been crafted as a big "Eff you!" to SECRET WARS mastermind Jim Shooter, as Byrne spends the entirety of the issue picking apart and explaining away Shooter's Doctor Doom continuity gaffe from the first SECRET WARS mini-series.

The end comes in a truly bizarre double-sized finale in SECRET WARS II #9, as The Beyonder BUILDS AN ARTIFICIAL WOMB SO HE CAN GIVE BIRTH TO HIMSELF AS A BABY BEYONDER. Yes, I just said that. The Beyonder gives birth to himself repeatedly, in an attempt to experience humanity, but is soon attacked by Marveldom assembled. Much fighting ensues, and the series finally comes to a fairly satisfying conclusion. But never fear, that conclusion would soon be shit upon in the pages of FANTASTIC FOUR.

But first, THE AVENGERS #266 delivers an epilogue that wraps up all of Jim Shooter's loose ends from SECRET WARS II #9. All's well that ends well, until....

...FANTASTIC FOUR #'s 316-319, a story that I have never, ever heard of, probably for a very good reason. Written by Steve Englehart, who I have never been a fan of, these four issues exist seemingly for the sole purpose of shitting on Jim Shooter and his creation, The Beyonder. Englehart, in a recent issue of BACK ISSUE magazine, said (And I paraphrase...) that he was basically told to create a story that tore down The Beyonder and did away with him, because no one at Marvel liked the recently-deposed Shooter and wanted to wipe his character from existence. I'm not sure if this storyline accomplishes that goal, because I really didn't understand anything that happened in it, let alone what the ending meant, or what the point was.

The story starts out in the frozen wasteland that used to be The Savage land. The Fantastic Four (The Human Torch, a heavily-mutated Thing, who looks like a spiky potato, The Torch's old girlfriend, Crystal, and Ms. Marvel, who is basically a lumpy female Thing) rip up the ground and find, literally, the word BEYONDER in 100-foot-tall letters. This is never really explained, or at least I don't think it is, because I was confused and bored for most of this story's four issues. Seeing this giant word somehow makes The FF go into The Negative Zone, where they find themselves joined by Doctor Doom. They fight Blastaar for a minute, run afoul of A.I.M. for half-a-minute, and finally meet The Beyonder, and find out his true, shitty, origin. (At least until Brian Bendis shit on the shitting on, by giving The Beyonder a new, even shittier origin, which made even less sense than the first shitting-on.) I've never been a fan of Steve Englehart, and most of my memories of his books are just like this FF run: Packed-to-the-gills stories that seem to exist solely to patch up tiny continuity holes that no one cared about, often making things even more confusing in the process. I just closed this book, and I couldn't begin to tell you how The Beyonder came into being, or why Englehart and company felt the need to tell this story. Truly a dark era for "The World's Greatest Comic Magazine"..at least the art, by Keith Pollard and Joe Sinnott, brightens things up.

Overall, a solid collection that features some uneven stories. Looking forward to the next volume, MARVEL SUPER HEROES SECRET WARS: AFTERMATH, which is all new to me.

Posted by The Crabby Reviewer at 7:31 PM