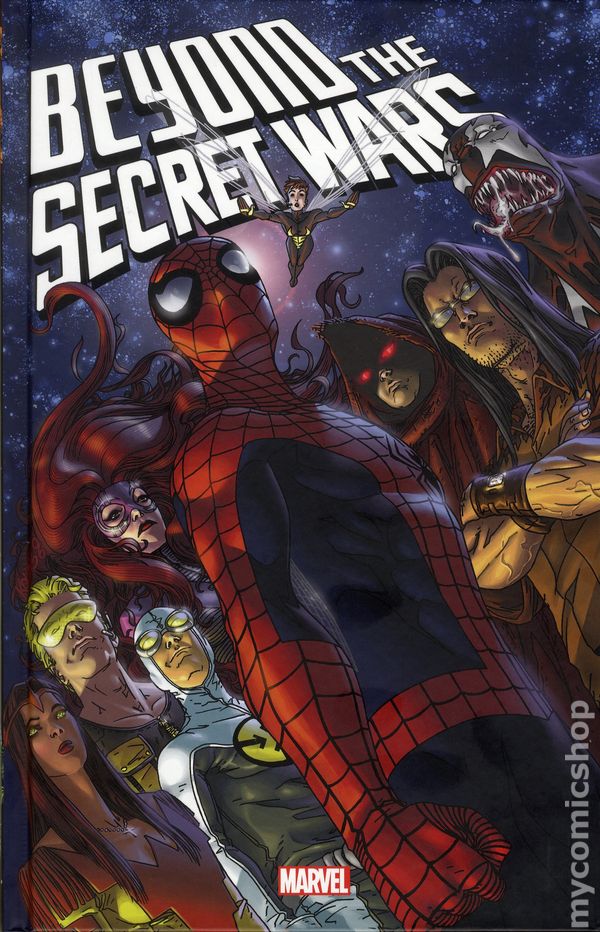 The reason why I bought the box set lies within this volume.....

I bought Dwayne McDuffie & Scott Kolins' BEYOND! mini-series in one fell swoop on a slow week for new comics almost a decade back. I was a fan of Kolins' work on DC's THE FLASH, and the premise looked intriguing, so I too the plunge, read it in one sitting, and absolutely loved it. When Marvel announced this massive Battleworld Box Set, and said that it would include BEYOND!, I just could not stop thinking about it. (You collectors know that nagging voice in your head.....) "BEYOND! in a really nice format...plus, all of that other stuff! It's 52% off! Just pull the trigger before the price goes up! You'll be kicking yourself later!" And the rest is poverty, I mean history.

So how does BEYOND! hold up to a second reading? Pretty well. All of the twists were already burned into my memory, so the thrill of discovery was gone, but the great story and art remain as enjoyable today as they were in 2006. Dwayne McDuffie's story finds a disparate collection of heroes and villains gathered by The Beyonder (Or is it The Beyonder...?) and offered the same deal as in SECRET WARS: Slay your enemies, and all you desire shall be yours. The combatants this time include: Gravity, Dr. Hank Pym and his ex-wife, The Wasp, Medusa, Venom, Spider-Man, The Hood, Kraven (Actually Kraven The Hunter's kid, who was pretty big back then...), Firebird, and a few other surprises along the way. McDuffie keeps the twists coming, and Kolins delivers some stellar art. The ending remains poignant, and hints at future plans that will probably never be realized, since McDuffie tragically passed away a few years ago.

Next up is the four-issue SPIDER-MAN & THE SECRET WARS, by Paul Tobin, Patrick Scherberger, and Clayton Henry, with Terry Pallot. Less a traditional story than a collection of between-the-scenes moments from the original Secret Wars, this was a cute little trifle with very nice art. Not something I would usually purchase, but I'm glad that Marvel included it here.

The book wraps up with a quartet of WHAT IF...? issues relating to SECRET WARS.
WHAT IF...? #4 (What if The Alien Costume had possessed Spider-Man?, from 1989) is written by the flat Danny Fingeroth, and features early art by Mark Bagley. An unremarkable story that has the usual old-school WHAT IF...? traditional body count and carnage.

This is followed by WHAT IF...? #114 ("Brave New World", from 1998), which has a clever premise: The heroes and villains stopped fighting, but remained trapped on Battleworld. Twenty five years later, their offspring attempt to make their own way back to a world they never knew. Fun stuff from Jay Faerber and Gregg Schigiel.

Next up in our tour of alternate universes is WHAT IF? SECRET WARS, from 2009, which asks "What if...Doctor Doom kept The Beyonder's powers?" Karl Bollers' script is livened up by Jorge Molina's stunning art, and the result is better than expected.

The book concludes with 2011's WHAT IF...? VENOM/DEADPOOL, by Rick Remender and Shawn Moll, which gets points for some clever references, but falls really flat in the humor department. I have yet to ever laugh at a Deadpool story, despite everyone endlessly talking about how funny they are.

Overall, a decent conclusion to the fiction portion of the Battleworld Box Set....Next up is the extras volume, MARVEL SUPER HEROES SECRET WARS: BEHIND THE SCENES, which is the second reason why I bought this set.


Posted by The Crabby Reviewer at 2:14 PM