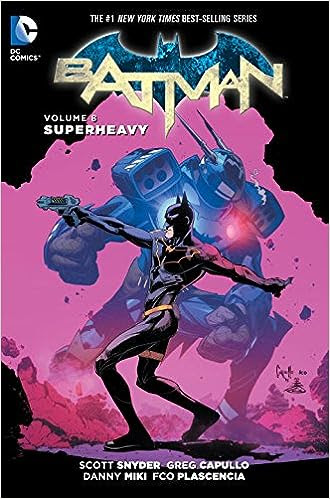 What a novel idea! Bruce Wayne ...replaced by another Batman....? Haven't seen that in at least a year!

I've tried really, really, REALLY hard to like Scott Snyder's "New 52" BATMAN, and he's managed to snag my interest for a few brief moments over the course of his eight volumes, but I always close the book thinking the same thing: There's just not a lot there.

My first beef with BATMAN, VOLUME 8: SUPERHEAVY is with the basic concept.: Bruce Wayne/Batman has vanished, so another brave soul must take up the cowl. This time it's Commissioner Gordon, who takes to the streets in a massive Bat-Mecha suit, packed to the gills with the latest tech and crime-fighting gear. In my lifetime (Actually HALF of my lifetime, because my first example comes around the early 1990's....) Bruce Wayne has been replaced as Batman this many times (If I forget any, please let me know...):
Replaced by Azrael in KNIGHTFALL, who was in turn replaced by...
Dick Grayson in PRODIGAL.
When DC started the 52 maxi-series, Bruce decided to take a year off, during which he was replaced
(Not as Batman, but just in general..) by a "Reformed" Harvey Dent. (How'd that work out?)
Grant Morrison killed Batman in BATMAN: R.I.P. and had him replaced by (Again!) Dick Grayson, and that storyline lasted for a long time. In fact, in the scheme of things, it pretty much just ended a handful of years ago.

Yet here we are again, with the "Let's have a new Batman!" storyline. And in DC's defense, it's not just here...Marvel has been going nuts with the same tired device lately, replacing Spider-Man, Iron Man, Thor, Captain America....Sure, there are probably a lot of different themes that can be explored with a female Thor, a black Captain America, a villain-inhabited Spider-Man...but where are the Editors who can say "This idea has been done a thousand times. Do WE need to do it, too?"

So DC goes back to the replacement well yet again, with Jim Gordon inside of Robo-Bat. (Don't even get me started on how Gordon goes from tired, chain-smoking, doughy old frump to young-looking, vital, strong as an ox and smart as a whip mech-wearer.) He finds himself up against a mystery man who calls himself "Mister Bloom", who has been giving random street thugs super-powers, basically making them all some kind of massive, shape-shifting creature that reminded me of Marvel's Sandman. Gordon battles a bunch of them, has a slew of flashbacks to show how he became Batman, gets stuck in an oven (An oven!)...then the book stops dead for a weirdly-placed fill-in issue that kinda-sorta ties into the main story for a bit at the end, then we get back to the oven, which leads to another cliffhanger, which closes out the volume.

Another huge gripe, and I'll try to stay as spoiler-free as possible, but this "Dionysium" element that Snyder has created has no place in a Batman story. It's too fantastic for the street-level story that he's trying to tell, and takes the book into the realms of gonzo Sci-Fi/Fantasy. I found it to be ridiculous in the last volume, and doubly so here.

Greg Capullo's art is nice, although all of his male characters look the same, except some are fat and some aren't. The out-of-place issue is illustrated by Jock, who is a fine cover artist, but I don't like his interior art at all.

I guess someone younger than I am might get more enjoyment out of this...When you get older, it seems, sometimes rightfully so, that you've read every story already. This, to me, is just more of the same old same old.