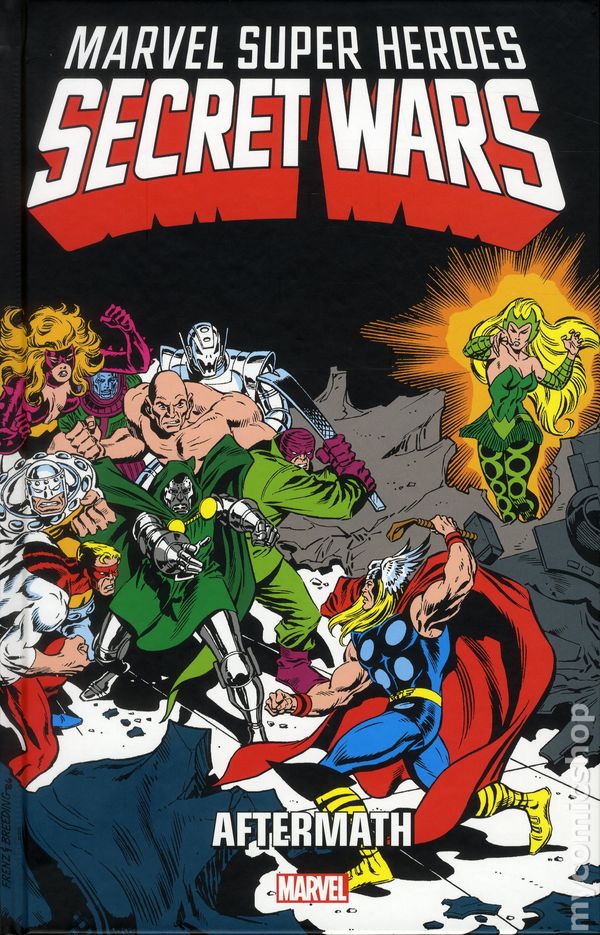 This volume is a hodgepodge of loose odds-and-ends that either relate to The Secret Wars somehow, or feature The Beyonder. The earliest story collected here is from September 1987, and the most recent is from August 2006, so you're spanning almost a decade here, and the quality is uneven, to say the least.

The book opens with THE MIGHTY THOR #383, which is pretty much a verbatim retelling of the Thor/Enchantress scene from early in the first SECRET WARS mini-series. Writer Tom DeFalco and artists Ron Frenz and Brett Breeding do a capable job, but don't bring much to the table. A decent, if somewhat inconsequential, flashback issue.

Next up is CODE OF HONOR #3, where we get a street-level view of The Marvel Universe and The Secret Wars from the POV of a New York City cop. Writer Chuck Dixon is basically doing a retread of MARVELS, except this one features '80's era Marvel characters and events. The painted art, by Bob Wakelin, Daerick Gross, and Paul Lee, ranges from gorgeous to hideous. Because this volume is strictly concerned with SECRET WARS, we only get the third issue of a four-issue mini-series here, which leaves this story feeling kind of slight.

Next up is Dan Slott's SHE-HULK #10, which covers the origin of Titania, and features Volcana. Great art by Paul Pelletier and Rick Magyar. Slott gives a lot of depth to a previously underdeveloped villain. Good stuff.

Did anyone ever tell you not to read any '90's Marvel books? Because I'm telling you now. The '90's were a dark era for Marvel, and they produced some really dreadful work during those years. I've been a Marvel Zombie virtually since birth, and at one point in the mid-'90's I was reading exactly one Marvel book per month (Peter David's THE INCREDIBLE HULK), and I was tempted to drop that one, too, thanks to HEROES REBORN fucking it up. DEADPOOL TEAM-UP #1 is a particulary egregious example of 1990's Marvel storytelling at its worst. The Beyonder figures into the first few pages of this shitfest, then wisely vanishes, leaving the rest of us to suffer through a loud, ugly, incomprehensible mess that involves Deadpool, sumo wrestlers, The Yakuza, and a midger Deadpool clone. Horrible stuff.


From there, we jump to issue 4 of MARVELS: EYE OF THE CAMERA, a semi-sequel to MARVELS. This is pretty much the same as the aforementioned CODE OF HONOR. The story, by Kurt Busiek and Roger Stern, is pretty much a greatest hits, but Jay Anacleto contributes some really nice art.

Next is a sentimental favorite of mine, Mark Gruenwald's QUASAR. This is issue #8, and it really doesn't give you the true flavor of the series, which was basically a black-hole of continuity loose ends. Mark Gruenwald was an encyclopedia of Marvel minutae, and he used QUASAR as a place to pick up loose story threads that had been laying around and attempt to tie them up. Here, Quasar goes up against a creature composed of the Battleworld replacement parts that Iron man used to repair his armor. A fun issue, but nowhere near as good as the book would become as it got up into the high teens and early 20's. That was GREAT storytelling, and I wish Marvel would reprint more Quasar so I could have those stories in a nice, permanent format.

Next comes a quintet of stories by Len Kaminski, taken from FANTASTIC FOUR #351 and FANTASTIC FOUR ANNUAL #'s 23, 24, 26, & 27, which find the energy of The Beyonder reconstitued as a female being known as "Kosmos". Kosmos takes a tour of the Marvel Universe, shits on Jim Shooter's SECRET WARS II a little bit, and encounters Marvel's cosmic heavy hitters. We also get some closure on The Molecule Man and his relationship with Marsha/Volcana. These are all basically fill-in and inventory stories, but Kaminski keeps the continuity fairly tight and tells a decent story, which is pretty amazing, considering that these five tales spanned almost five years of publication.

The book closes with THANOS #'s 8-10, a confusing story that finds Thanos in the middle of a prison-break on The Klyn. The fact that these are parts 2, 3, & 4 of a six-part story doesn't do readers any favors, and it's made worse by Keith Giffen's muddled writing. I've always loved Giffen as an idea man, when he was backed up by a strong partner who did the actual writing, such as J.M. DeMatteis on the JUSTICE LEAGUE INTERNATIONAL books, or the Bierbaums on LEGION. As a solo writer, he leaves a lot to be desired. It's never made clear why Thanos appears during the prison-break, or why Kosmos (Now called, for no reason, "Cosmos"....) is there, supposedly de-powered, but still seeming oddly powerful, in my opinion. Gladiator, Star-Lord, and some weird outer-space Tinkerbell all figure into this mess, but I really had no idea what was happening. I did enjoy the art, by the always-solid Ron Lim and inker Al Milgrom. There's also a small excerpt from ANNIHILATION: SILVER SURFER that closes the book on Kosmos/Cosmos, releasing The Beyonder's energy out into the galaxy.

Overall, this is probably the weakest book so far in the box set. It was fun exploring these odd nooks and crannies of the SECRET WARS saga, most of which I've never read, but there was nothing here that I would kick myself for missing, either.

Bring on the next volume, SECRET WAR.....


Posted by The Crabby Reviewer at 2:26 PM