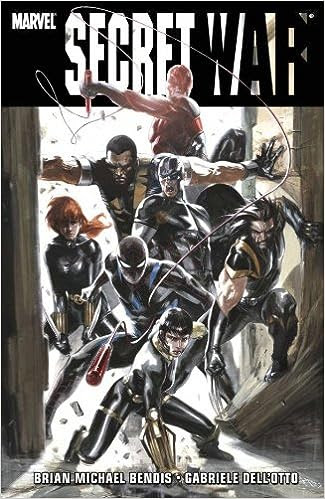 Secret War in name only....

The ninth volume in the MARVEL SUPER HEROES SECRET WARS BATTLEWORLD BOX SET is a departure, of sorts, from the previous eight volumes, in that it's mostly unconnected to The Beyonder. He does make a brief appearance, though...Just long enough to get shit on yet again.

This collection starts off with THE NEW AVENGERS: ILLUMINATI #3, which is beautifully illustrated by Jim Cheung.  The story, written by Brian Michael Bendis, finds "The Illuminati", a secret cabal of Marvel's biggest thinkers (Represented in this particular issue by Black Bolt, Namor, The Sub-Mariner, Reed "Mr. Fantastic" Richards, Professor X, and Dr. Strange) delving into the origin of The Beyonder. I read this issue probably a decade ago, and I may have, possibly, missed an infuriating retcon back then. Bear with me:

Reed Richards tells the group that he's picked up The Beyonder's energy signature. He says "But I've had the Baxter Building's interdimensional sensors on the lookout for The Beyonder ever since the Battleworld idiocy." OK, no mention of the FF's MANY encounters with The Beyonder during SECRET WARS II....weird.

Moving on, when The Illuminati finally find The Beyonder, he's in a fake version of Manhattan, acting out the golden building scene from SECRET WARS II with a fake Luke Cage, Iron Fist, and Spider-man. Is this Bendis' backhanded way of saying that SECRET WARS II never happened...? I haven't read about anyone else having this take on this particular issue, so maybe I'm reading too much into this, but...it rubbed me the wrong way. Regardless, what came next pissed me off then, and it pissed me off again now: Bendis reveals that The Beyonder was never really an all-powerful omniscient entity, he was A MUTATED INHUMAN who got too big for his britches. I found this to be just too much to take. I don't know why everyone at Marvel has such beef with The Beyonder and have to keep fucking with him. Next....

The Five-part SECRET WAR finds Nick Fury recruiting a group of super-powered operatives for a secret mission to Latveria. This is, on the surface, a decent read, but digging a little deeper uncovers a whole multitude of cracks in the plot. Fury enlists Spider-Man, Wolverine, Daredevil, Luke Cage, Captain America, and The Black Widow, all of whom just blindly follow him to Latveria (Homeland of Doctor Doom) without clue one as to what he wants. It's a convoluted conspiracy that amounts to this: Latveria's Prime Minister, Lucia Von Bardas (Who....?) has been supplying tech to various super-villains, and Fury suspects that a massive act of terrorism is in the works. His plan...? Bring in the aforementioned team of heroes, along with a new Bendis creation, super-powered teen/S.H.I.E.L.D. agent Daisy Johnson, and have them knock down Castle Von Doom.

Daisy Johnson knocks down the castle, using her earthquake powers, WHILE FURY AND HIS TEAM ARE IN IT. Seriously, she knock down a whole castle right on top of herself and her team. But it's OK, because, while a bunch of Latverians died, Daisy and company were wearing "Impact suits". I guess that these suits also protect the totally uncovered heads of people like Daisy, Nick, Luke, and Wolverine. Retarded. (Also retarded is having Captain America go to Latveria as an ambassador, then giving him a black Captain America suit and having him ATTACK THE WOMAN HE JUST HAD A DIPLOMATIC MEETING WITH. Because she'll just figure "Wow, that guy looked JUST like Captain America in a blacker version of his suit...shield and all. Weird. Can't have been him, though. Oh, well."

So they knock down the castle and kill this woman no one has ever heard of, and then Nick Fury erases all of their memories. Didn't any of their loved ones say "Hey, where were you for the past few days?" Guess not, because it takes them one full year to figure anything out, and that also happens to be when Von Bardas, not quite dead, comes for revenge....dunn dunn DUNNNN!!

This is a truly stupid story, made slightly more palatable by Gabriel Dell'Otto's beautiful painted art. The usual Bendis complaints apply, such as how dozens of characters all speak in the exact same authorial voice, and the use of bizarre phrases, such as Spider-Man's exclamation of "Yike-a-hooty!", or President Bush calling the Fury/Latveria situation a "thingamadoo". Each individual issue is rounded out by another Bendis favorite tactic, the "Interview transcript", where we get page after page of text, saving Marvel from paying an artist, and probably giving Bendis extra writing income. These transcripts are especially hard to follow, due to everyone involved sounding exactly the same.

Next up, we get THE PULSE #'s 6-9, which basically tells the whole SECRET WAR story all over again, this time from Jessica Jones' perspective. Bendis gets paid twice for one story by having the first part of the storyline be a verbatim recreation of the first chapter of SECRET WAR #1., only this time it's illustrated by Brent Anderson.  This story ends with Bendis making Iron Fist, one of the nicest guys in The Marvel Universe, act like a total dick to his best friend's girl. Bendis just doesn't get a lot of these characters. (OH! Bendis also has Wolverine freak out in a bar while shouting "STOP RAPING ME! ALL OF YOU!! STOP RAPING ME!!!" Sebretooth should have popped out of a room somewhere and actually raped him as soon as he said that.)

The volume wraps up with  SECRET WAR: FROM THE FILES OF NICK FURY, which is my most hated of all cash-grabs. the dreaded "Marvel Handbook tie-in". This is nothing but clip art and text pieces, which I loathe. Your mileage may vary.

Overall, this was a trifling story. It may have carried more weight, WOULD have carried more weight, if Bendis had included Doctor Doom as the Monarch of Latveria, instead of making the big bad an elected official that no one had ever heard of before. I didn't hate this book, but it's profoundly stupid and takes itself waaaaay too seriously. Bring on BEYOND THE SECRET WARS.....


Posted by The Crabby Reviewer at 4:43 PM