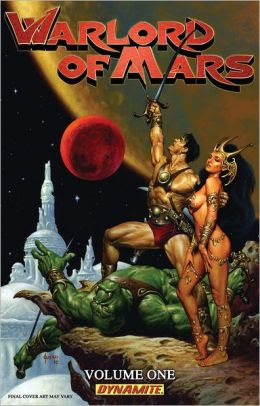 Aside from a few stray issues of Marvel's JOHN CARTER, WARLORD OF MARS series that I picked up when I was a kid in the mid-'70's, I haven't really had much exposure to Edgar Rice Burrough's heroic Virginia soldier. The recent movie piqued my interest enough to give Dynamite's WARLORD OF MARS series a try, though, and I'm glad I did. Comprised of the first nine issues of the series, the first volume tells of John Carter's arrival on Mars, his initial meetings with future ally Tars Tarkas and future Wife Dejah Thoris, and features more outrageous adventures and gratuitous gore and nudity than you can shake a stick at.

Having never read the source material, I can't really say how faithful this adaptation is, but Writer Arvid Nelson and Artists Stephen Sadowski and Lui Antonio have really done an outstanding job. There are some things that are intrinsic to the John Carter story that just seem, to me, anyway, patently ridiculous.....The fact that almost everyone on Mars exists in a state of nudity or near-nudity, for instance, Carter's Superman-esque abilities, I could go on and on.....Nelson makes all of these things go down easier by telling an enjoyable, straight-forward story that reminded me why comics are so much fun. The book is INCREDIBLY Gory, so I wouldn't recommend this for younger readers. In addition to the first nine issues, WARLORD OF MARS, VOLUME ONE also features a complete gallery of every regular and variant cover, a small design gallery, and an extensive section featuring John Carter's journal entries regarding Martian life and civilization. An excellent read all around.

Posted by The Crabby Reviewer at 3:23 PM