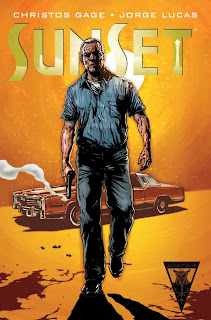 Christos Gage's geezer-noir SUNSET would make a great Clint Eastwood vehicle. The story of an aging Mob thug who is drawn back into a life of violence after three relatively peaceful decades of living off the radar is just made for the big screen. On the printed page, it comes off only slightly less impressive than it would on film. Gage's writing is spot on, especially before it becomes a Senior Citizen's version of OCEANS 11. The main problem that I had was the art, by Jorge Lucas. The entire book is composed of photographic backgrounds, overlaid with photoshopped bodies, topped by crudely pasted in Celebrity heads. Nick Bellamy is Jason Statham with added wrinkles, Nick's Son jarringly alternates between Ben Affleck and Vince Vaughan, with a side of John Favreau. The most distracting character is Mob Boss Gianelli, who is illustrated using a variety of Jack Palance photos. The cobbled-together collage look of the art REALLY distracted me from the story, and lost a lot of points for the book as a whole.

Posted by The Crabby Reviewer at 11:18 AM