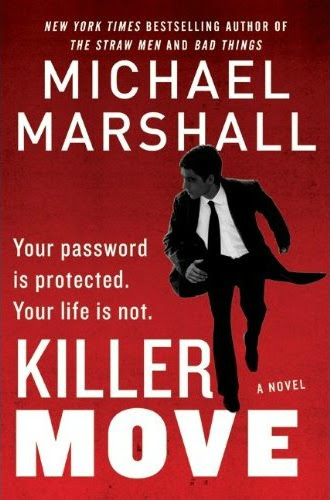 I'm generally not a fan of "Massive conspiracy somehow involves every single Human Being you know in an attempt to destroy your life" stories. KILLER MOVE is definitely one of those books. I found the first half of the book absolutely preposterous for just those reasons. I mean, if a co-worker pissed someone off, and that someone approached me to involve me in their weird revenge fantasy, why would I go along with it? Or how about if I went along with it and slipped the poor slob that was being targeted a note telling him "Hey, man.....(Fill-in-the-blank) is trying to destroy your life!" These massive conspiracies just defy belief. That said, Michael Marshall managed to convert me around the halfway mark. His conspiracy makes a kind of terrible, twisted sense. KILLER MOVE is the kind of book that you really need to go into with no knowledge of the plot at all. You can read the book's synopsis for that, if you're so inclined. I will give you this small warning. KILLER MOVE is ultimately tied very closely to Michael Marshall's STRAW MEN series, which I did not know going in. I own the books, but haven't read them yet, so I felt a little blindsided. I think Marshall did a great job of filling in the uninitiated....I don't feel like I missed anything, but just be prepared for a "Wha...?" moment, if you haven't read those books.

Posted by The Crabby Reviewer at 11:21 AM