Conan: The Daughters of Midora and Other Stories 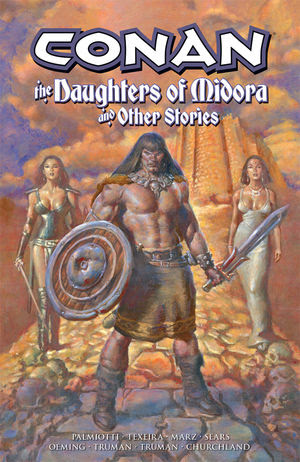 CONAN: THE DAUGHTERS OF MIDORA AND OTHER STORIES collects various odds and ends (A One-shot, a mini-series, and a story from MySPACE DARK HORSE PRESENTS, as well as a story from USAToday.com (!!), and one brand-new tale), to varying effect. The art ranges from barely suitable to atrocious, and the writing isn't much better. I've been reading CONAN since the mid-1970's, and everything here has that "Been there, done that" feel to it, and I've certainly seen it done better. The opening story, by Tim and Ben Truman and Marian Churchland is probably the best of the bunch. The titular DAUGHTERS OF MIDORA reads and looks like a Marvel Comics fill-in issue from the mid-'80's. I've always enjoyed Mark Texeira's art, but his storytelling ability is as atrocious as ever. The next two stories, by Ron Marz and Bart Sears, fare slightly better...I've enjoyed Marz and Sears' work before, and Marz spins a fun couple of stories here. Sears has evolved slightly from his early '90's musclebound style, and his storytelling is greatly improved. That said, their two stories were decent, but seemed better due to the poor company they were in. The book is rounded out by a new Michael Avon Oeming story, which was decent, but suffered from the same malady as the rest of the book: CONAN, especially in the comic-book format, has been done to death. We've seen it all before, and unless you bring your A-game, you're going to get lost in the shuffle. This collection is standard, workmanlike CONAN......a decent time-waster, but nothing to get excited about.

Posted by The Crabby Reviewer at 8:27 PM