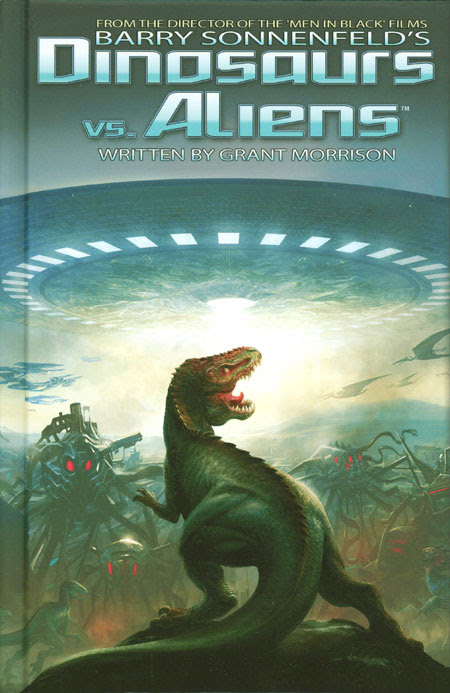 Something told me to check this out thoroughly before buying it.

But did I listen to my inner voice?

So here we are, nearly a year after I bought it, and I've finally read this graphic novel, which was presented as a "Done-in-one" adventure, only to find out that it's basically a prologue to a movie that will, in all likelihood, never get made.

DINOSAURS VS. ALIENS is the brainchild of MEN IN BLACK/ADDAMS FAMILY/WILD, WILD WEST Director Barry Sonnenfeld, who, in not so many words, tells you in his foreword that he was instructed to create a graphic novel by The William Morris Agency, so they could sell it as a film. The idea was handed off to Grant Morrison, who wrote a graphic novel (Of which this must surely be the barest fraction of...) and a screenplay. The graphic novel is illustrated, beautifully, by Mukesh Singh, which is a real bright spot and kept me from tossing this in the trash out of frustration when I encountered the cliffhanger ending. Singh's art starts out amazingly detailed, but gets less so as the book goes on...You get the impression that Dynamite wanted just enough done that they could package it up and sell it as a graphic novel. I have a suspicion that this was a casualty of the death of Virgin Comics, and was left unfinished as a result, and Dynamite picked up the leftovers, which they, for one reason or another, could not manage to get finished.

What's here is good, mainly due to Singh's art. Morrison presents Dinosaurs like we've never seen them before, and he raised a lot of questions that don't get answered, such as how the Dinosaurs manage to make such nifty, intricate headdresses.... 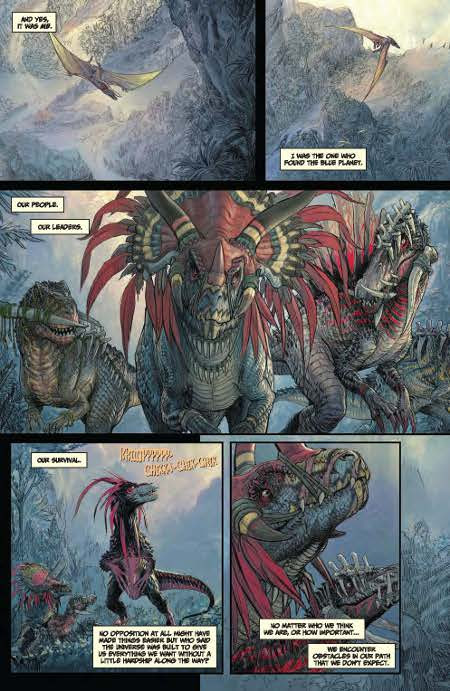 without the benefit of opposable thumbs.

This could have been great stuff, if it was a complete story, which it's not. If this were a film, this book would probably represent the first twenty to thirty minutes.

As a stand-alone graphic, it's incomplete, and a rip-off, especially since there has not been a peep uttered about providing a conclusion. Fool me once, Dynamite......
Posted by The Crabby Reviewer at 1:08 PM