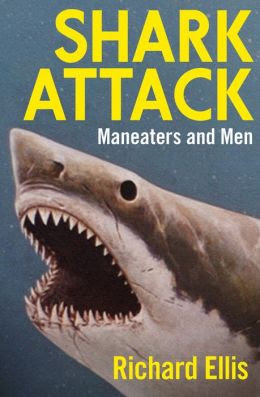 Disclaimer: I am terrified of Sharks. My Mother was a little liberal about what she let me watch as a kid, and I was traumatized at an early age by both JAWS and THE EXORCIST. I was terrified of them both as a kid, and I'm only slightly less terrified of them now. (This actually was beneficial to me, because, aside from those two movies, there's not much else out there that scares me, both at the movies and in real life. Thanks, Mom!) I was also bumped by some form of Shark when I was 10 or 11 years old, while visiting relatives at The Jersey Shore. That was all she wrote for the Ocean. I'm done.

That said, I love Sharks. As long as I'm not in the water with them.

So Richard Ellis' SHARK ATTACK: MANEATERS AND MEN seemed right up my alley. The book is, theoretically, Ellis' case for the Shark as a integral part of the food chain, a noble creature that rarely harms people, and has no taste for our tender, tasty flesh.

This point tends to get lost in the chapters where Ellis catalogs dozens and dozens of grisly Shark attacks, some by Sharks large enough to BITE PEOPLE IN TWO!!!!!

So, while his chapters on the wholesale slaughter of Sharks by Asian fishing fleets who catch them by the hundreds, slice off their fins, and toss the still-living, helpless, crippled Shark back into the Ocean to die are heartbreaking, he doesn't exactly succeed in making this guy

seem like something you want to ever, ever, ever EVER stumble across while out for a swim.

Ellis has crafted a gripping, thought-provoking book, and hopefully it can, in some small measure, help the cause of Shark conservation. As for me, as long as they stay off of land, I'll stay out of the ocean, and it'll all be good.

Posted by The Crabby Reviewer at 1:28 PM