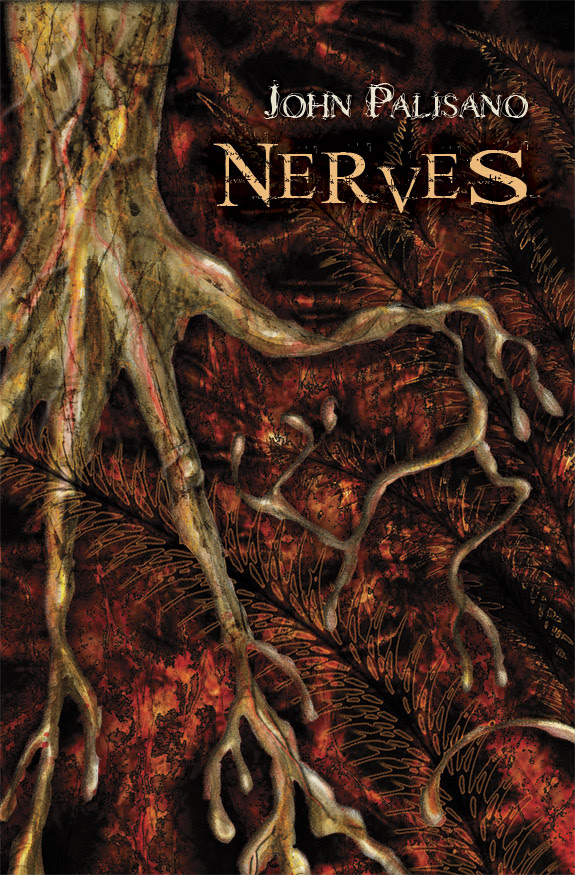 The back cover copy of Nerves, John Palisano's debut novel, features a blurb by John Everson, which advises the reader to "Think X-Men meets Lovecraft", and that immediately had me drawing comic-book analogies: Generally, a comic book will start out with an origin story, where we learn who the various characters are, how the Hero gained his powers, how he ran afoul of the Villain(s), time and place and purpose are established....going forward, the comic-book and it's creators will assume you have at least a passing familiarity with the characters and the plot, and they generally get more and more difficult for a new reader to penetrate. If Nerves were a comic-book, it wouldn't be a first issue...it would be issue 324.

The book starts off in the middle of the action, with a character named Josiah, who can extend his nerves out of his body and use them as weapons, killing his enemy, Ogam. Then we zip over to Istanbul, where Ogam recruits Josiah's Brother, Horace, in a plot to kill a man named Leyke. Leyke and Horace team-up and kill Ogam. Leyke dies in the battle, as does Ogam. Horace, who can kill people just by being around them, hits the road with Leyke's girlfriend, who can bring life to dead things. Meanwhile, Josiah has abducted a washed-up Singer named Minnesota Flatts, and taken him on a road trip to sing to his ailing Mother. Interspersed with all of this are interludes about a guy named "The Fish Man". There's a big flood, and Josiah, Minnesota Flatts, and The Fish Man are attacked by giant, Psychic, sentient Shellfish, who give them all mysterious powers.

That's the first half of the book.

I didn't leave out any characterization, plot, backstory...nothing.

We are given no backstory, no context, no reason why these people act the way they do, what they want, where they're going, nothing. There are no descriptions of the characters, so they're all blank slates....Josiah and Horace are written young, but then Horace is described as old, bald, and fat. Why is this guy called "The Fish Man"...? Where did these Fish, who seem to be Lobstrosities that have wandered out of Stephen King's Dark Tower books, come from? Where did the FLOOD come from? Why do characters just drop their existing lives and go on dangerous road trips with crazy, violent people they've just met? If some guy that was just attacked by talking Fish told me "Come with me!", chances are I wouldn't go.

I have honestly never read such a perplexing book.....I was constantly flipping pages to see if my copy was misprinted, or printed out of order. It literally seemed like there were three or four books that preceded Nerves, and I was totally in the dark. It was amusing seeing how crazy Palisano could get with the characters and the situations, but after hundreds of pages of escalation without explanation, it really got tiresome.

Posted by The Crabby Reviewer at 11:19 AM