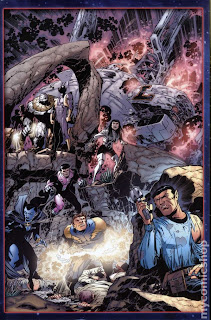 Now THIS is how you do a crossover!

DC and IDW absolutely knocked this one out of the park. I'm a casual fan of both STAR TREK and THE LEGION OF SUPER-HEROES, but I thought this was a phenomenal, clever, perfectly executed book. Chris Roberson's script is great, and really evokes the feel of a lost episode of classic TREK (The only one I can actually say that I enjoy....), as well as Levitz/Giffen era LEGION, circa THE GREAT DARKNESS SAGA.

Roberson's deceptively simple story find the crew of The Enterprise and a small group of Legionnaires shunted into an alternate universe, ruled by a despot that fans of both franchises will find very familiar. (The way that Roberson handled the identity of the villain was extremely sly....I had a guess, which turned out to be right, but also turned out to be wrong. Well played!) There are appearances by characters from both the DC and TREK universes, and enough action to satisfy fans of both franchises. Roberson manages to keep all of his cast acting in-character, and I can even forgive him for leaving Scotty on The Enterprise this time around. The art, by Jeffrey and Philip Moy, suits the script well....everyone looks right, and their storytelling is spot-on. I never had to stop reading and try to puzzle out what was going on because the Artist couldn't tell a story worth a damn, which happens quite frequently with more well-known Artists.

My only complaint with the series was how abruptly it ended. Granted, it ended exactly how it needed to, but I would have been happier if the ending had a bit more "Oomph!" to it, and if the characters had a few pages together to decompress and compare notes at the end. A small complaint, but one that keeps STAR TREK/LEGION OF SUPER-HEROES one digit shy of being a perfect 10.

The STAR TREK/LEGION OF SUPER-HEROES hardcover collects all six issues of the DC/IDW mini-series, as well as all covers and alternate covers. IDW provided a review copy of the first issue, which was good enough to make me run out and buy the hardcover. Very sneaky, IDW...very sneaky, indeed......


Posted by The Crabby Reviewer at 2:59 PM