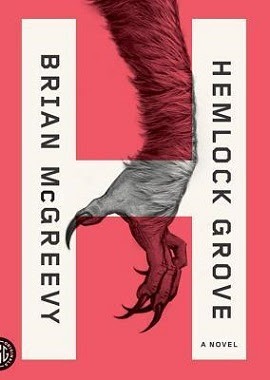 HEMLOCK GROVE treads closer to Bizarro territory than I'm generally comfortable with. I'm not averse to the occasional odd or unusual element in my reading, but Brian McGreevy crosses over the "That's just a little too much" line almost immediately. The book is ostensibly about a small town plagued by murders that seem to be the work of a Werewolf. The main suspect, according to the local gossip mill, is a newcomer named Peter Rumancek, who, oddly enough, IS a Werewolf. McGreevy populates the small town of Hemlock Grove with a weird cast of characters, each more unusual than the next, but the one that almost made me put the book down is teenaged Shelly Godfrey, a Frankenstein's Monster-esque girl who stands over seven feet tall, glows in the dark (!) and wears huge plastic cubes filled with potting soil on her feet. (I can take a lot, but even I have my limits!) Peter and his sidekick, Shelly's mind-controlling Brother, Roman, become Hemlock Grove's Hardy Boys, setting off on a mission to find and destroy the murderous Werewolf before it can kill again. The book plays out as a Horror-tinged teen soap opera...I can totally see this novel coming to the CW network as a series...complete with unrequited teen love, a questionable immaculate conception, a mad Scientist conducting a bizarre experiment that is never fully explained, hints of an ancient evil lying beneath the town that is also never fully explained, and loads of parent/teen angst. HEMLOCK GROVE is not a bad book, but I've gotta tell you: Brian McGreevy has a writing style that sometimes verges on impenetrable. There were sentences that I had to read four or five times, sometimes OUT LOUD, before I could get a rough idea of what it was he was trying to say. I couldn't decide if these passages were amateurishly written, or pretentiously written. I tend to lean towards pretentiousness. He does manage to pull off a stunning last twenty pages, taking the various story arcs to some unexpected places, despite leaving a few story threads dangling in the wind. I'm sure there will be a sequel, and I'm just interested enough to give it a try.
Posted by The Crabby Reviewer at 3:15 PM